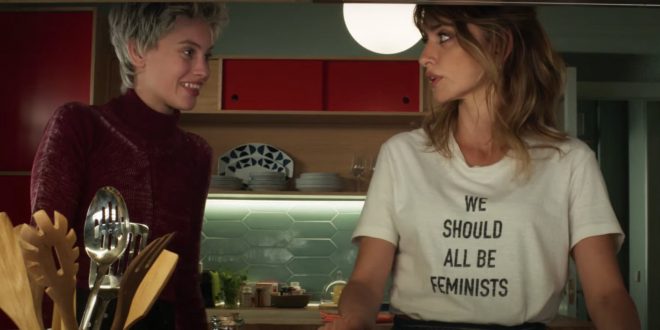 Pedro Almodovar devotees will be comfortably satisfied with his latest intriguing, imaginative display of filmmaking; relying on his ubiquitous actor Penelope Cruz (never disappoints) as an anchor for success; she is the quintessential professional and is intensely impressive in the role of “Janis”, a middle-aged photographer giving birth for the first time; costarring ingenue Milena Smit as “Ana”, a teenager sharing the same delivery date as Janis; two mothers, two infant daughters, two disparate lifestyles and a single coincidence that binds them endlessly. Typical of Almodovar’s adroit subterfuge, the nucleus of the scenario revolves around the mass grave (Janis’s great-grandfather is one of the victims) of murdered innocents during the Spanish Civil War (1936-1939) “Parallel Mothers” blends to exquisiteness marvelous melodrama, historical accuracy, and treasured memories, resulting in a movie of rare distinction and awe.

In its 24th season the episodes are still as titillating, intelligent and spine-tingling as seasons past; some have been devoted to viewing since its inception in 1996, starring Amanda Burton as pathologist “Sam Ryan”; since 2004 Emilia Fox has been “Dr. Nikki Alexander” and she is in her prime, excelling in grace, accomplishment and diplomacy, accompanied by David Caves, forensic scientist “Jack Hodgson” a complicated and brilliant scientist, a lonely twosome without the alacrity and wit of “Clarissa” (Liz Carr) and teammates “Dr. Thomas Chamberlain” (Richard Lintern), and perpetually missed William Gaminara (“Leo Dalton”),  Tom Ward (“Dr. Harry Cunningham”) with their absence a chunk of the heart has ceased beating; still capable of blistering one’s psyche until the “silent witness” has finished speaking.

BEING THE RICARDOS  (AMAZON PRIME)

Lucille Ball (1911-1989) was an instinctive, comedic genius, her every gesture, her impeccable timing could not be duplicated; because of today’s technological wizardry, “I Love Lucy” is a staple, mainstay in any household that opens it doors to her iconic talent; writer/director Aaron Sorkin cast Nicole Kidman and Javiar Bardem as the bombastically doomed couple “Lucy” and “Ricki” Ricardo; possibly the strength of Lucy and Dezi’s personas, or simply timing, I found the plasticity, mimicry of Kidman and Bardem overwhelmingly unbearable. Of value and interest was the relationship between William Farley (“Fred”, exemplary, J.K. Simmons) and Lucy, theirs was a meeting of intellects, logic and understanding. Hence going forward, I will adhere to reruns, still capable of generating uproarious laughter.