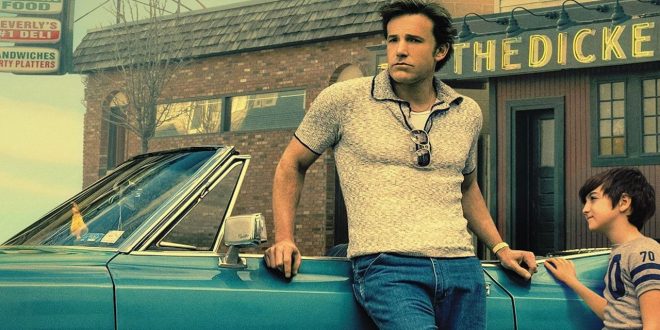 Most of us have an “aunt” or “uncle”, not always biologically related, but ubiquitous nonetheless, and forever in one’s corner; mine was “Aunt Sally” and in this tender-hearted film, based on the memoir by J.R. Moehringer and sensitively directed by George Clooney, Ben Affleck with depth, intelligence and feisty revere is “Uncle Charlie”, JR’s youthful sage, companion, an electrifying presence, more than a substitute for his delinquent father. Casting is key and superb in “The Tender Bar”: Daniel Ranieri as young J.R., depicts the author’s prodigious curiosity and attention to family members and bar patrons with diplomacy and concern; Tye Sheridan as the college age J.R. is fine as a boy who is smart but recognizing his “outlier” status as a freshman at Yale University; Briana Middelton, “Sidney” nails the haughty sophisticate, designated heartbreaker with aplomb and poise; mini roles by J.R.’s mother and grandfather depicted with alacrity by Lily Rabe and Christopher Lloyd.

“The Tender Bar” as did 2020’s “Hillbilly Elegy” scores in showcasing a memoir of an individual besting the odds, rising above a dysfunctional background, using the impotency of his upbringing as a force to ignite his creative acuity and soar.