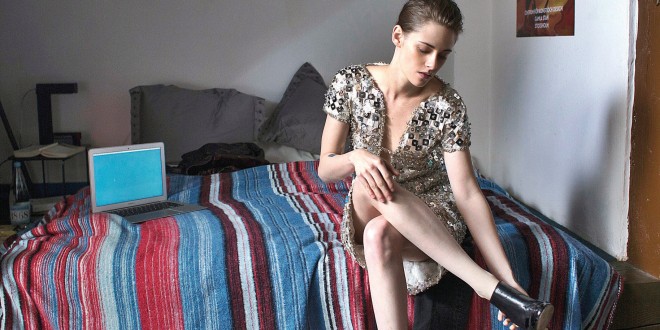 This image released by IFC Films shows Kristen Stewart in a scene from "Personal Shopper." (Carole Bethuel/IFC Films via AP)

Once again a performance transcends the film (“Jackie”, “The Founder”). If you are a fan of director/writer Olivier Assayas (“Clouds of Sils Maria”) the leap of faith required in “Personal Shopper” might be of no consequence but for others, the chasm is too vast to even consider; I fall into the latter category.  Kristen Stewart is marvelous in the challenging role of “Maureen”, a young woman clenched in the wretched hands of grief; her twin brother, “Lewis” has died of a heart deficiency and she is seeking closure; as mediums, they believe in communication from beyond;  Lewis promised Maureen a “sign” and “Personal Shopper” strives to achieve its karmic goal.

Maureen is a disenfranchised “personal shopper” working in Paris for a narcissistic fashion-maven; motorcycle jaunts to Chanel and other high-end retailers define her days; treated subserviently, she dons the pricey creations, the mirror reflects an enigmatic, stylish mannequin; all we ever see or know of Maureen is her pain; possibly Assayas’s intent.  Stewart in clipped, curbed cadence delivers poignantly, even profoundly.

As a thriller “Personal Shopper” is substandard, implausible; texting, a contemporary tool, cannot sustain suspense in Maureen’s emotionally charged journey; there are numerous gaps crying for satisfaction; discontent lingers with its jejune culmination.

Grief is egregious and contagious; it can immobilize, transform and spread, infecting all who enter its arena; Maureen is a palpable, tangible metaphor for grief’s carnage; there is little or no light left in the aftermath, for the viewer, or inauspiciously this “Personal Shopper”.