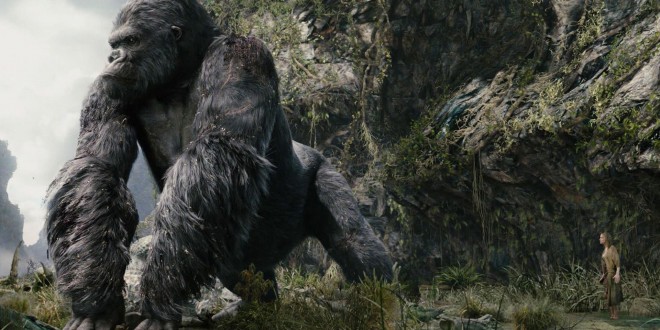 2017’s “Kong” calls the shots; no longer shackled, beleaguered, more than a chest-thumping, roaring primate, he is “King” of this feral, enigmatic island; residents/tourists abide by his rules. It is 1973, and a myriad of agencies, government/civilian are behind a secretive, clandestine expedition to unearth the mysteries/monsters of Skull Island. Director Jordan Vogt-Roberts scores with a formidable cast: Tom Hiddleston, “Lieutenant James Conrad” a British SAS officer, in need of employment; Samuel L. Jackson, “U.S.Lieutenant Colonel Preston Packard”, leader of the “Sky Devils”, helicopters with attitude; John Goodman, “Bill Randa” runs Monarch project, obfuscating its hidden agenda; Brie Larson (not a Faye Wray, Jessica Lange clone) “Mason Weaver”, photojournalist who can take care of herself; the film’s most likeable, ingratiating character “Lieutenant Hank Martin” a relic from WWII (his 28 year lease is up) depicted with insouciant charm by John C. Reilly; a copacetic blend of characterization, thrilling technology,  filmed in the entangled, vegetated lushness of Vietnam and Hawaii.

Contemporary Kong is unforgettable; anthropomorphically his eyes communicate his emotions; he slays interlopers threatening homeland stability; a “god” to the Island’s inhabitants, shielding them from the dormant but lethal “Skull Crawlers” who have annihilated Kong’s forefathers. Equilibrium is shattered with the arrival of the troops; Kong has some magnificent vicissitudes to quell, but he prevails with aplomb; like his predecessors he is a “gentleman who prefers blonds” or nearly blond, his encounters with Mason are imbued with respect; a meeting of the minds, laced with tenderness.

“Kong: Skull Island” is pure wonderment visually, even narratively; a King who actualizes his allegiance to the crown; under all that gruff, growl and grit lies an equitable soul; once you get to know him, he’s a really nice guy!