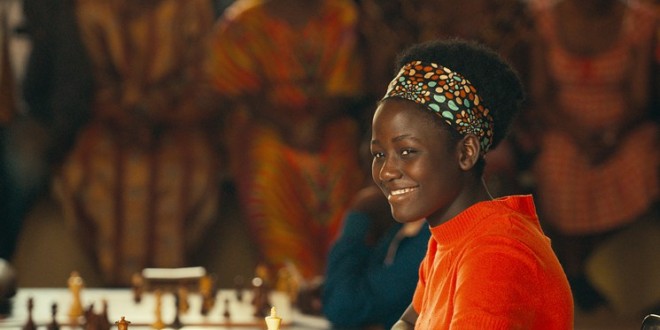 Director Mira Nair is an intrepid, fearless force in the film world; she vanquishes taboos, champions the unrecognized, embraces and educates the masses.

“Monsoon Wedding” (2002) the most acclaimed of her films but secondary to 1998’s “Salaam Bombay” a heart- wrenching tale of parentless children living on the streets of India; this brilliant film led to the creation of the Salaam Baalak Trust, located near the railway station in Delhi, helping the myriad of homeless children disgorged daily into major Indian cities.

Madina Nalwagna captures the essence of poverty-stricken Phiona as she clings to chess as her vehicle into another realm; as her challenges and vicissitudes mount,  Madina’s performance expands exponentially.

Lupita Nyong’o (Academy Award, “12 Years a Slave”) as Phiona’s mother Nakku, gives a depiction imbued with immense integrity; poverty, widowhood, five children does not rob this woman of her colossal dignity, strength and devotion to her children. She is a fortress and constant pillar in Phiona’s life.

David Oyelowo (“Selma”) is outstanding as Robert Katende, the visionary who initiates and nurtures Phiona’s aptitude for the game; he keeps her focused and grounded as she fells her contemporaries and bests her older adversaries. What is monumentally moving is all this occurs in the midst of immeasurable destitution.

Katwe is a dire village on the outskirts of Uganda’s capital, Kampala, brought to prominence by Nair’s film (based on the book by Tim Crothers and Disney Productions); the “Queen” in chess is the most powerful, able to move both horizontally and vertically; Phiona Mutesi reigns celestially as a “Queen” who continues to be a beacon of inspiration, beyond the boundaries of her small town, universally.