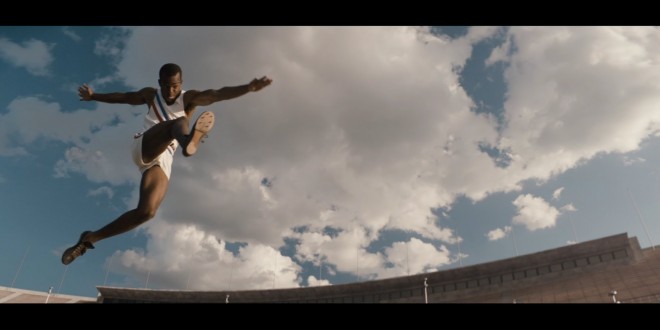 Jesse Owens, (1913-1980) whose legendary reputation is a beacon of inspiration today, eighty years after his Olympiad triumphs in the 1936 Games in Berlin, Germany; with the fleetness of Hermes he garnished, in track and field, four Gold Medals, embarrassing Hitler’s “master race” hypothesis. Stephan James is superb as Owens in director Stephen Hopkins creatively-crafted tribute to a man among men.

Commencing in 1933, with segregation at its peak “Race” typifies the times, the travails of black men, struggling in a colorless world, swallowing derogatory slurs, showering after their pale team mates; besting hurdles, more daunting than those on the track. Owens, attending Ohio State University, is coached by Larry Snyder (1896-1982) (stunning performance by Jason Sudeikis), whose Olympic hopes were pummeled when a plane he was piloting crashed.

“Race” excels with the extreme complexities Owens battled in his decision to compete in the Olympics; Hitler had been in power since 1933 and his racist laws were being enforced throughout Germany. How could Owens as a black man be part of an event in a country that shunned his race? The juxtaposition between the Olympic Stadium and the “round ups” on the streets of Berlin screams with glory and horror.

Controversial filmmaker Leni Riefenstahl (1902-2003) is portrayed with the proper mix of minx and mettle by Carice vanHouten. Leni’s Olympic footage has contributed to the perpetual lionization of Jesse Owens. Problematically depicted is Avery Brundage (acerbic performance by Jeremy Irons) mega- developer, who championed US participation in the games (against major support for withdrawal); suspect, are his dealings with Hitler’s propaganda  minister, Joseph Goebbels, a menacing Barnaby Metschurat.

In researching the inimitable Owens, I discovered a flaw in the film. Owens said Hitler did not snub him; he gave his signature salute; it was President Franklin Delano Roosevelt who never sent him a congratulatory telegram or invited him to the White House that inflicted a lifelong injury. “Therein lies the rub.”