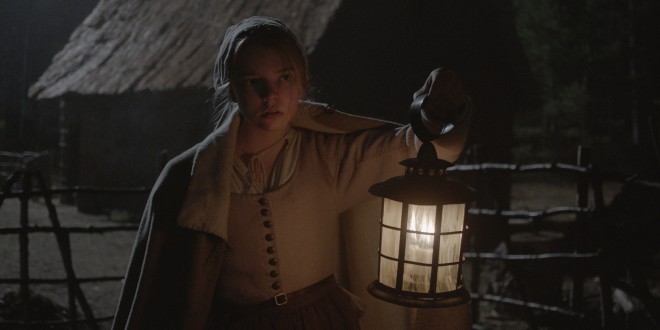 1630, New England; a banished family, forced by the Church to move to an unincorporated area, bordering on a bewitched, sinister forest, (a landscape worthy of a Constable canvas).  Writer/director Robert Eggers’s copious research on 17th-century mysticism results in a horrifying psychological tale, guaranteed to haunt one’s dreams interminably.

Superbly acted, especially by Anna Taylor-Joy, the eldest of five children; she is with her baby brother when he disappears,  garnishing the mistrust of her siblings; there’s  an underlying creepiness resonating with each family member. An unhealthy religious fanaticism informs their every viable second; children constantly praying for the alleviation of their sins; a vengeful “god” perpetually prepared to strike down the unrepentant sinner and a devil ready to devour the spoils. Sixty years before the Salem Witch Trials, where the exceptional were hung for practicing witchcraft; women especially, accused of being Satan’s handmaids. “The Witch” is a pristine example of misogyny on steroids.

What is unnerving is the use of religion as a pejorative tool to castigate, alienate nonconformists; hundreds of years later it is still a blade sowing a swathe between disparate parties.