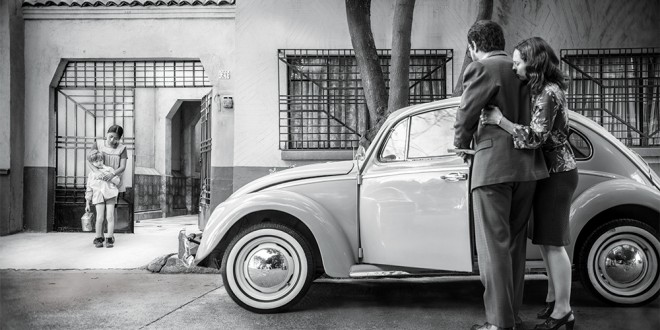 Profundity prevails in this sweeping, magnificently glorious film; director/writer Alfonso Cuaron’s reminiscent tale of life in a middle class Mexican family stuns with its purity, lack of guile, genuine veracity; black and white format emphasizes the functionality of a household whose maid “Cleo” (newcomer, Yalitza Aparicio) adhesively keeps the family, and its daily mechanisms in tow; Cleo is worthy of their adoration. Astoundingly, because of Cuaron’s brilliance “Roma”, a benign story of an average family, rises to the Shakespearian level; the landscape’s overwhelming, encompassing awe embraces viewers with a magnitude rarely experienced; 1970’s, references a residence where humanity still reigns over modernity, Cleo does the laundry on the rooftop, television, still in its embryonic phase, seizes the fascination of the four children, their parents and Cleo. The banal scenario, lifestyle is interrupted by the 1971 Corpus Christi Massacre, a lethal, student fostered protest; Cuaron’s bow to politics and the government’s lack of accountability.

“Roma”, like many of Cuaron’s films, is imbued with and resonates kindness: “Y Tu Mama Tambien”, a young woman initiates two teenagers to the world of “la dolce vita”; “Children of Men”, a man, risks his life and saves the future of mankind, by escorting a pregnant woman to a safety zone; “Gravity”, one astronaut sacrifices himself for another; again in “Roma”, Cleo’s kindheartedness, love, is the savior, lifeline, of a family that could not exist without her.

Understanding the immensity of Netflix’s impact and the accessibility it affords millions of viewers, in the case of “Roma” it is a disservice to deprive oneself the wide screen experience; more than the story it is the topography that captures and triumphs long after viewing.