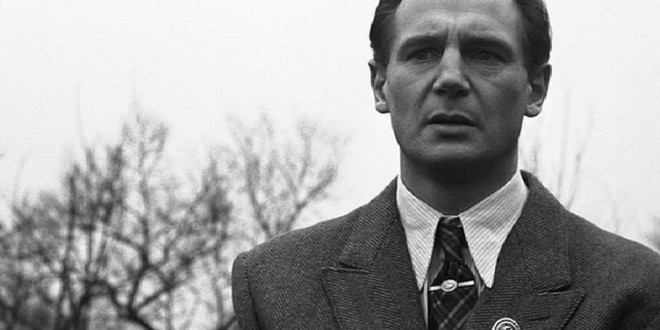 An iconic film, a masterpiece by director Steven Spielberg, a haunting musical score by John Williams and violinist Itzhak Perlman, and daunting performances by Liam Nesson (Oskar Schindler), Ben Kingsley (Itzhak Stern), and Ralph Fiennes (egregiously evil Amon Goeth); why revisit a testament to the incomprehensible shattering of every commandment adhered to, taught by the major faiths, why witness, once again, the reprehensible slaughter of a people, solely because their culture, religion, identity was labeled, categorized as Jewish? For me, the same reason I toured the 9/11 Memorial Museum in New York City, to pay respect to the perished, the silenced, those uncivilly cauterized from actualizing their potential. And to lionize the lionhearted, Oskar Schindler.

“Schindler’s List”, sears with the same degree of intensity as its first viewing; filmed in black and white, no color to soften its atrocities, blur its propulsive immorality, ghoulish  xenophobia, but soars with a hero, unlike Marvel Masters, who is real, alarmingly steadfast in confronting intractable, heinous, misanthropic principles: Oskar Schindler (1908-1974) a German industrialist, a member of the Nazi Party, with devastating savoir faire, bon vivant audacity, manipulated, charmingly coerced the SS to allow his factory to be staffed with doomed Jews. Liam Nesson’s blazing, dynamic depiction captures Schindler’s intransigent fearlessness in the face of deplorable depravity, embodied by Amon Goeth (stunningly iniquitous performance by Ralph Fiennes), a man who slays at whim the powerless. Itzhak Stern, an accountant, runs the factory and his relationship with Oskar exponentially deepens as the war escalates; Ben Kingsley imbues the role with immense integrity.

Truly remarkable, “Schindler’s List” reminiscent of antiquities’ injustices to the Jewish people: Assyrian captivity (740 BCE), Neo-Babylonian Empire (586 BCE), Jews expelled from Rome (139 BCE), on and on from one century to the next, the Jews are persecuted, dispersed, despised; the Spanish Inquisition, commencing in 1231 extending into the 19th century; what resonates is that the persecutors, their civilizations have died, “gone with the wind” and the Jewish people are still here, still thriving, gifting mankind; this is a miracle well worth contemplating.