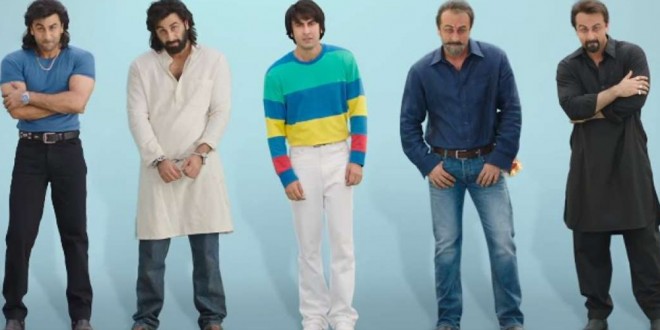 The film commences with a search to find a writer to be his intellectual doppelganger; hearing his side of the “fake” news accusing him of being a “terrorist” after the disastrous 1993 bombings in Mumbai.

Ranbir Kapoor, gives a highlighted, remarkable portrait of “Sanju”; it demands overwhelming skill to play a personage whose physicality is engrained with the populace; Kapoor bewitches, convinces in his brilliant forgery of Dutt’s facial grimaces, gait, cadence; implausibility melds into the possible, a mesmerizing feat forecasting a FilmFare accolade. Equally lauded is Paresh Rawal as “Sunil”, self-sacrificing, ignoring egregious taunts in his robust, undaunted efforts to help his son. Their scenes together give the film a poetic, altruistic kindness; unique rarefication of a father/son pilgrimage to understanding and love. Vicky Kaushal’s skyrocketing depiction of Sanjay’s long-enduring friend “Kamlesh” is empathically hypnotic; loyalty beyond the pale, through devastating torturous hallucinations, profound personality deviations, entrenched until “terrorist” allegations ruptures his trust in Dutt.

Ultimately, Sanjay survives his “winter of discontent”, rises phoenix-like from the detritus and claims the heritage he ignored; now deservedly, he embraces his father’s vision of his beloved Sanju.