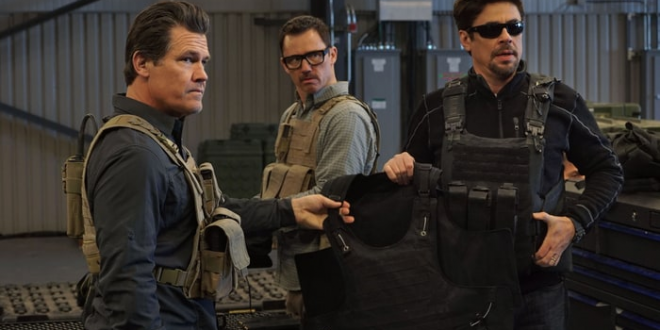 SICARIO: DAY OF THE SOLDADO

“The evil that men do lives after them; the good is oft interred with their bones.” Watching director Stefano Sollima’s gruesome scenario of “hitmen”, Marc Anthony’s pungently ironic oration at Julius Caesar’s funeral kept interfering with my concentrative faculties; blackness permeates this film, it is intentional, smothering, blurring lines of propriety on all sides; Mexican cartels have increased their resume, adding human trafficking (including suicide bombers) to their roster of egregious services; the U.S. government, a shade lighter, is manipulative, inciting a war between the cartels, supposedly for the “greater good”.

“Sicario: Day of the Soldado” would have been a total bastardization of time save for the performances of three principals: Josh Brolin, reprising his role as “Matt Graver”, CIA agent, Benicio Del Toro, a second round as undercover agent “Alejandro Gillick “, their uncontainable masculinity pulsates, dominates the screen, ultimately fizzling as the plot thins; Isabela Moner gives a refreshing performance as kidnapped “Isabel Reyes”, the sixteen-year-old daughter of a mob monster; entitlement, pretentiousness of privilege, flayed as she faces the horror of her predicament.

Ultimately, what could have been a narrative, metaphor for the contemporary chaos, engulfing today’s world: borders, cauterization of family dynamics,  fractured ideals, amoral means to an end, was sadly, solely, simply “sound and fury, signifying nothing.”