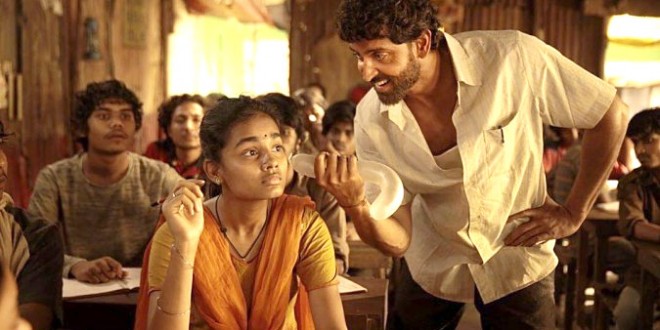 Do not give this film short shrift because of its Bollywood genre. Here is a movie for whoever has been electrified, inspired, challenged, encouraged by an instructor, educator; a teacher whose magnetism moves mountains, drives one to excel, explore unknown, untethered avenues, resulting in lifelong quests in fertile fields,  perpetually nourishing the brain, beyond boundaries, beyond one’s own expectations; its nutrients, inimitably satisfying, as one, without restraint, imbibes in its “garden of earthly delights”, knowledge craved at any cost, eventually touching a celestial level of satiation. India’s Anand Kumar (1/1/1973) (sensitive, self effacing Hrithik Roshan) a mathematical genius from Patna, Bihar; poverty and his father’s death dashed his Cambridge University acceptance.

A myriad of fluctuations in his professional and personal life lead to a serendipitous epiphany; sending fliers throughout the poorer villages in India, advertising a free education to the gifted few who qualify; his goal of 30, once met, others must wait another year; he prepares the scrawny, unsophisticated teenagers to take and pass the entrance examination for the Indian Institute of Technology; selling every possession and with the aid of his brother houses, feeds and schools these unlikely prodigies. The film is bitingly realistic, compelling, in the competition between the elitist, privately educated students and their intellectual, but callowed, equals; specters of the caste system are gingerly addressed.

Director Vikas Bahl culls an impressive cast of youngsters, allowing their personalities license to “question” under the tutelage of a magical mathematician, culminating in solutions hidden from all, except the enlightened, chosen few; those divined, regardless of caste, color.