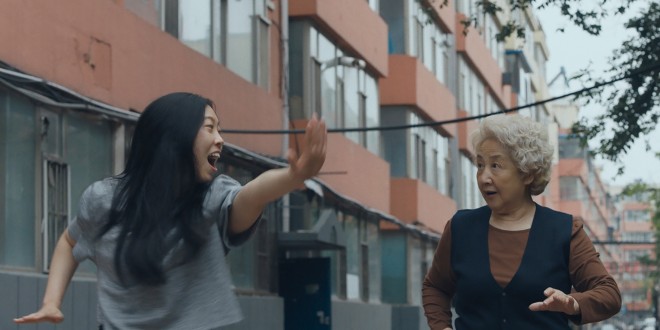 Rarely does a film generate benevolent happiness, sweetness, witnessing a family’s love and concern for a precious matriarch; Zaho Shuhzen is dazzling as “Nai Nai” (grandmother), unaware of her fatal stage 4 lung cancer, she devours life and living with staggering, stunning greed; she is an extraordinary tonic, a canyon of care; her granddaughter, “Billi” (Awkwafina, “Crazy Rich Asians”) an American, is empathetically connected to Nai Nai, they are contemporary spirits, bound by heritage and overwhelming love. The remarkability of the film, written and directed by Lulu Wang, lies in its elegant narrative, culturally defined by Chinese tradition; the victim is protected from her crushing diagnosis by the family; “benign shadows” have invaded her lungs, in essence she is hale and hearty; brilliantly cast, each family member, struggles with inevitability.

A wedding, is the pretense for a reunion in Changchun, China; a time of supreme blitheness suffused in gloom; Nai Nai glows while, especially Billi, anguishes in pain and frustration; she feels her grandmother should be informed. The intensity of the dialogue between Billi and her parents (Tzi Ma and Diana Lin) speaks to the disparity of the Western aesthetic (Billi) and the Eastern culture; insecurity, intimidation resulting from being an alien on foreign turf.

Buoyancy, temporarily vanquishes dolefulness, at the wedding dinner; speeches, songs resonate with hilarity, poignancy, goodness. “The Farewell” (stay until the final credits) leaves one longing for those who have vanished, yearning for more moments with those still present.