Latest Reviews
Home » Hollywood » ONCE UPON A TIME IN HOLLYWOOD 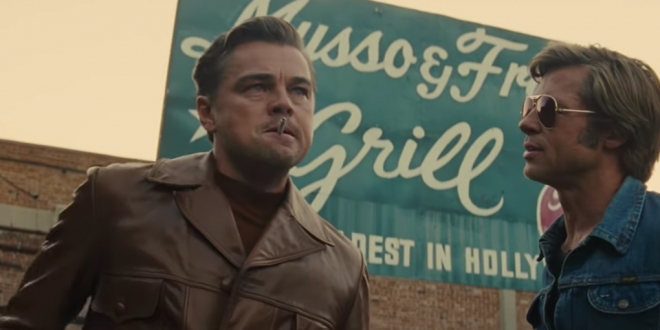 ONCE UPON A TIME IN HOLLYWOOD

Quentin Tarantino’s mellowest, most nostalgic, tempered film to date; bludgeoning bloodshed of “Inglorious Basterds”, “Django Unchained”, “The Hateful Eight”, replaced by an homage to 1969 Hollywood; filmed in 35-millimeter celluloid, focusing on the waning stardom of “Rick Dalton” a nascent cowboy and his stunt man “Cliff Booth”; Leonardo DiCaprio as “Rick” and Brad Pitt, “Cliff”, are at their classic, professional peak as actors; magically they meld every moment into one rhythmic, haunting testimonial to the dying spaghetti western and the exsanguination of “Bounty Law”; fully cognizant that the Bruce Lee’s are encroaching on their theme turf. There is a breezy graciousness, a charming comfortability in their relationship; a fondness without obsequiousness, reminiscent of Butch Cassidy and the Sundance Kid. DiCaprio is captivating, depicting a role within a role;  Rick, recognizing his typecasting, lacking a dollop of self-aggrandizement, crying and accepting his diminishing glory. Pitt’s, “Cliff”, saturated in confidence, masking his mettle in hilarity, is the foundation of the film; the last fifteen minutes are stunning with Tarantino’s twist on a happy ending.

Rick lives next door to Sharon Tate and Roman Polanski; Margot Robbie is luminous as Sharon; refreshingly alive, exuberant, with limited dialogue she exudes promise, excitement, kindness and unparalleled joy at seeing herself on the screen.  Margaret Qualley (“Fosse/Verdon”) as a Charles Manson groupie, a siren of sexuality; pheromones palpate pungently as she tempts the unyielding Cliff. Dakota Fanning, shuns her ingenue mantle, and stupefies as an off-kilter,  Manson, manic murderer.

Skipping sensationalism Tarantino’s reverence for the archival, the filmic icons of his youth, “Once Upon a Time… in Hollywood” is a tender, evocative, sentimental jaunt into a wistful, bygone, unforgettable era.