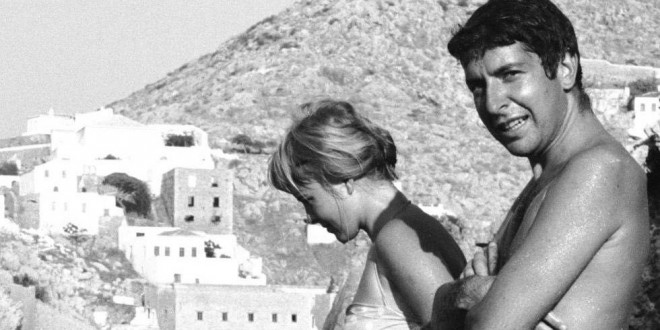 At times, achingly tragic, pervasively poignant, Marianne Ihlen (1935-2016) and Leonard Cohen’s (1934-2016) love saga is enchantingly directed by Nick Broomfield; it sears to the soul a destined pairing, even when shattered, but never severed, resonating forever in the lyrics of “So Long, Marianne”.

Historically the “muse” is the dynamite, explosive, freeing the artist’s vision, blasting blocks, blinding the core of genius, killing hibernation, such catalysts as: Dora Marr/Picasso; Gala Dali/Paul Eluard, Max Ernst, Dali; Ada Katz/Alex Katz; George Dyer/Francis Bacon; Edie Sedgwick/ Andy Warhol; Marianne and Leonard meet on the rain-starved, idyllic Greek island of Hydra in 1960; theirs was an instantaneous, combustible, electrifying relationship; she, Norwegian, blond, a prototype of the “forbidden fruit” to his swarthy, dark, tortured handsomeness; Leonard, the progeny of elite Jewish Canadians was a writer whose talent as a songster blossomed with Marianne’s direction, devotion.

Powerfully depicted, are the 60’s and the freedoms gifted to the youth of the day: promiscuity, drugs; Hydra was an Olympian, boundary-less haven of lust, love, infused with an absence of accountability; for some enlightenment, others destruction; Leonard’s escape forecast the death of their halcyon years.

Pungently honest “Marianne & Leonard: Words of Love” is peppered with interviews of those who witnessed their tumultuous epoch, Leonard’s addictive womanizing, Marianne’s heartbreak and sorrow. In the end, dying three months apart, his final letter, received on her deathbed, washed away the aged hiatus with sentiments suffused with friendship, adoration and truth.