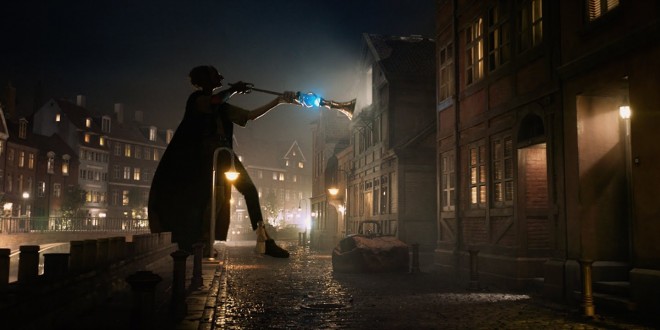 This enchanting fairy tale is poignantly real, heart warming, painful and beautiful; adult viewers will be moved, not just to uproarious laughter, but also frequent tears.

Based on the book by Roald Dahl, director Steven Spielberg and writer Melissa Mathison excavate the vast corridors of their imaginative souls and gift besotted audiences a gentle giant and bespectacled orphan destined to inhabit a treasured chunk of real estate in one’s memory bank.

Mark Rylance (2016 Academy Award for supporting actor in “Bridge of Spies”) is dazzling as the digitally enhanced “BFG”; his loneliness forces his sojourns from the land of giants, where he is bullied, to a small English village here he pillages “Sophie” (magnificent Ruby Barnhill) a ten-year-old, equally lonely insomniac, after she spots him in the wee hours, maundering through her neighborhood. Their partnership develops through a series of mishaps in the astounding land of the giants, where BFG is the runt of the litter, refusing to eat humans; his tormentors do not thwart him from his profession as a “dream catcher”; marvelous moments of him and Sophie chasing dreams (as we all do) imbue the film with pure, untainted, untrammeled wonderment.

The genius of the film resides in exposing all aspects of the human condition: acceptance and understanding of the “other”, hilariously depicted at Buckingham Palace with the Queen; Sophie’s adjustment to BFG’s twisted pronunciation of the English language; friendship may germinate in the least likely of circumstances, encounters, crossing parameters of size, gender, hue, beliefs, resulting in fascination and awe.

Herein lies the glory of “The BFG”.