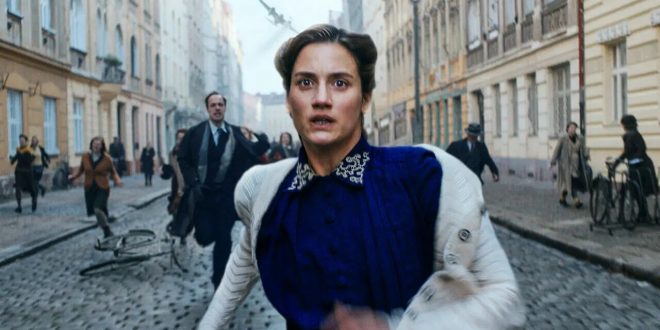 Two explosive and extremely traumatic films based on actual events; one inadvertent and one intentional; both are viscerally challenging to watch. “The Bombardment” from its inception is shocking: an idyllic landscape in the outskirts of Copenhagen witnesses the bombing of a taxi holding three virginally beautiful women in white; a young cyclist, “Henry” (Bertram Bisgaard) rendered mute by the sight of the slaughtered wedding party; it is 1945, Germany is gasping its final breath; the shelling was done by the RAF, mistaking the taxi for a German tank. Initially director Ole Bornedal steeps viewers into the lives of collaborators, its victims, and the RAF’s strategies to sabotage the headquarters of German invaders, in the heart of Copenhagen; lying in close proximity to a French Catholic school; intriguingly interwoven between the wartime dynamics are the children and families involved in the school and their relationship to the nuns, in particular “Sister Teresa”, iconoclastically, and with subtle hilarity, Fanny Bornedal; Ester Birch’s performance as a sprightful, deliciously precocious “Rigmor”, stings the soul and punctures the heart. The severity of the outcome bleeds with the same velocity as it did in 1945.

I am still reeling from this film, vengefully directed by Vivek Agnihotri; atrocities perpetrated against the Kashmiri Pandits in the 1990’s; males forced to “convert, leave or die”; supreme, gratuitous violence on a level, even the most seasoned movie veteran finds revolting: vivisection, slaughtered children, women forced to imbibe in blood of loved ones; the film crosses every line of propriety. Viewed through the lens of a young man whose family was murdered in the genocide and the initiation of the evacuation of approximately 100,000 Hindus; based on stories, untold for years, of survivors; actor Anupam Kher portrays the patriarch Pushkar Nath Pandit whose son, daughter-in-law and grandson were victims of the Islamic terrorists; “man’s inhumanity to man” has never been more atrociously depicted; reeking of veracity, lacking a grey area, “Kashmir Files” relevance lies in historical revelations that should be heard but its exploitative presentation assassinates its message.