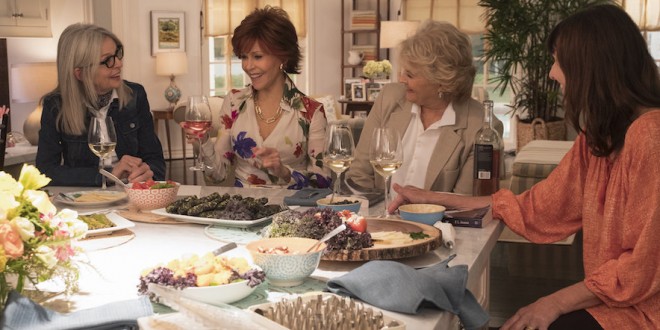 A number of years ago a friend challenged me to read the “50 Shades Trilogy”; over a 10- day time span I tackled E. L. James’ salacious scenario only to discover that she capitalized, and brought into the twenty-first-century, what had been practiced for millenniums in Asian cultures; Christian Grey and Anastasia Steele became paradigms of kinky, cutting edge, contemporary sexual satisfaction; Jamie Dornan and Dakota Johnson were manufactured for the roles.

Director Bill Holderman with actors Jane Fonda,”Vivian”; Candice Bergen,”Sharon”; Diane Keaton, “Diane”; and Mary Steenburgen, “Carol” (members of “The Book Club”, reading “Fifty Shades of Grey”) create a silly, limpid, embarrassing episode in the lives of sexagenarian, septuagenarian, octogenarian women behaving in teenage mode; their focus on the antics of characters barely beyond puberty is an awakening of what has gone missing from their lives (if indeed, it ever existed); central casting pairs Don Johnson with Vivian, Richard Dreyfuss/Sharon, Andy Garcia/Diane, Craig T. Nelson/Carol (the only partnership that resonates viability).

Good actors struggling to bring legitimacy to artificial characters; absurd, are Diane’s daughters treating her as if she is suffering from early onset Alzheimer’s, widowhood is not a sign of dementia or incapacitation. Keaton should have rejected the role.

Audiences identifying with these flimsy, desperate, heavily-lashed women would be better served by viewing the highly titillating “50 Shades Trilogy” where lessons learned, maybe never practiced, will never be forgotten.