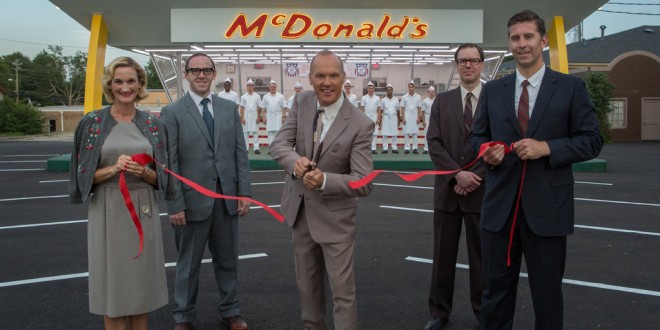 Indisputably, Michael Keaton is at his peak as one of  today’s most superlative actors; he is electrifying as Ray Kroc (1902-1984), the energizing prod behind the McDonald’s empire. At times combustible, Keaton sinks his teeth into Kroc’s ambitious, predatory, quasi-maniacal conquering of brothers Mac and Dick McDonald (depicted magnificently by John Carroll Lynch and Nick Hofferman) simple, brilliant “fast food” concept; Kroc a desperate, driven drinker, milkshake machine salesman, discovers McDonald’s in San Bernardino, CA. in 1954. Kroc is fifty-two years old, heading towards “Willy Loman” extinction but ignited by a vision of the future; eradiating  all that stood in his way; naïve, decent, hapless Mac and Dick were extinguished by the Kroc conflagration. In hindsight they never should have flirted with the flame.

Director John Lee Hancock and writer Robert Siegel capitalize on Keaton’s paralyzing power as an actor to squeeze every pulsating scene to its maximum, but somehow in the process bled any humanity, sensitivity out of the man; a functioning alcoholic, wife-ignorer and wife-robber, callously unkind in his treatment of his soon-to-be ex-wife (he had three, two are referenced); Laura Dern, in a suffocating role as shunned Ethel, falls into “there’s no there there”category; Linda Cardellini is spunky, smart Joan Smith (1928-2003), (she and Ray, cut from the same fabric) munificently dispersed Kroc’s fortune after his death.

Fascinating is the scene where Mac and Dick McDonald explain, in tandem, the hurdles, misfortunes and conquests leading to the success of their roadside restaurant; Kroc lustily salivates as he envisions a world emblazoned by the golden arches.

Unfortunately, “The Founder” flounders with the one sided interpretation of Ray Kroc as an insensitive, overbearing, megalomaniac; minimally highlighting his dedication to perfection, insight in ferreting potential owners of McDonald’s franchises, enormous conscientiousness in quality control. “The Founder” focuses on an not-so-fine man depicted by an immensely fine actor.