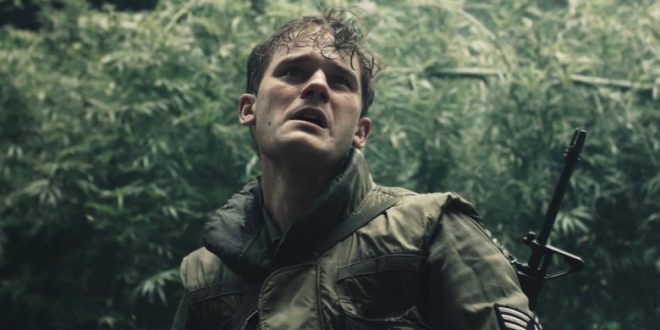 Viet Nam, and a war (1955-1975) that artistically fractured the modern era, America, no longer the universal rescuer, harbinger of safety, annihilator of the nefarious, champion of the persecuted, oppressed, destroyer of autocratic, despotic regimes; art, lost its power to change mankind by its beauty, grace, the Nabis were dead, slaughtered by misplaced jingoism.

“The Last Full Measure”, directed and written honestly and reverently by Todd Robinson, tells the real story of Airman Willian H. Pitsenbarger Jr. (1944-1966) deprived of the Medal of Honor, after saving countless lives, while sacrificing his own; thirty-two years, those who lived, fought for this man’s recognition and worthiness.

Remarkable courage, resilience come to the fore in 1999 when a Defense Department Legal staffer, Scott Huffman (finely tuned, Sebastian Stan) is conscripted to “quiet the waters” by listening to the aged warriors, questing justice for “Pits” and honored closure for his fragile, venerable parents (Christopher Plummer and Diane Ladd are stately as William Sr. and Alice Pitsenbarger). Legendary actors William Hurt, Samuel L. Jackson, Ed Harris, Peter Fonda (1940-2019, the film is dedicated to him) achieve boundaryless greatness in their depictions; living through one of America’s bleakest moments, understanding PTSD,  survivor guilt, their every word, reaction is seared with unfeigned pain; haunted by the horror and shame as marginalized, maligned veterans of a hated, detested, bashed, lost struggle; no longer heroes, just victims of a sensibility gone awry.

“That from these honored dead we take increased devotion to that cause for which they gave the last full measure of devotion.” With utmost clairvoyance Abraham Lincoln saw the glory of those who sacrificed their spirits so a future could retain theirs.

2020-01-29
Peneflix Admin
Share !
Previous: THE GENTLEMEN
Next: THE RHYTHM SECTION