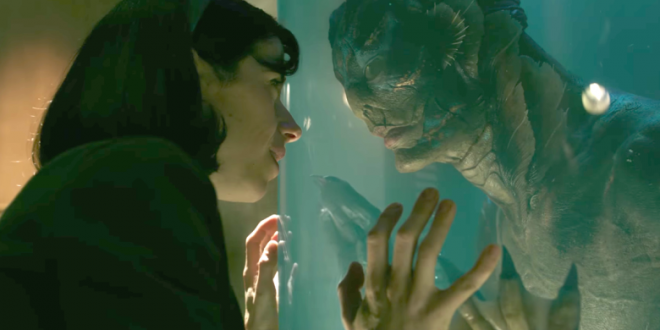 It is 1962, at a Baltimore research facility an “asset” (Doug Jones) is delivered, caged and howling (aka King Kong) from the Amazon jungle; its warden, “Richard Strickland” (stupendously sleazy, Michael Shannon), with a cattle prod, attempts to tame this half-man, half-amphibian (Del Toro’s work resonates with mythology, “The Shape of Water”, a prescient example), then destroy it, before Russian interference.

Inimitable Sally Hawkins, gives an almost wordless portrayal of mute, cleaning lady “Eliza Esposito”; from the onset, she is unique, a foundling with a strangely scarred neck, an indomitable spirit, fiercely empathetic; working the night shift, present at the arrival of this anonymous creature; fearlessly she befriends him and their relationship stuns with understanding, pristine genuineness;  compatibility, generated by a familiarity, shared solely by them. A heart-wrenching, poetic poignancy informs their quiet correspondence, reminiscent of “Beauty and the Beast” and “Cyrano de Bergerac”; beneath the surface harbors decency, goodness.

Flawless casting and cinematography enhance the prodigious scenario: Richard Jenkins, delivers a spectacular portrayal as “Giles”, Eliza’s neighbor, another outsider who joins her clandestine mission to rescue the watery wizard; Octavia Spencer, exponentially grows in her every theatric endeavor, as Eliza’s co-worker “Zelda” a tough, unappreciated woman, who eventually champions and aids in Eliza’s plight; Michael Stuhlbarg, the “good doctor”, with an enigmatic past, compromises his position, as savior and champion. Dan Laustsen’s , rainy, murky, ethereal cinematography, surrealistically adds a Gotham-like, stylistic tone to the film.

Commencing with fantastical floating imagery, to cooking, cleaning, copulation “water” and its magical fluidity, authorizes the viewer to “shape” a gloomy or happy “ever after”.