Latest Reviews
Home » Hollywood » THE WORLD TO COME (IN THEATRES), I CARE A LOT (NETFLIX) 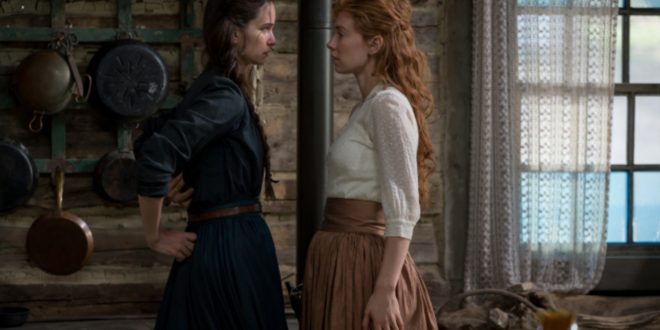 THE WORLD TO COME (in theatres)

Two contemporary films about same sex relationships that beg comparisons. Notably, the grander of the two is “The World to Come” directed by Mona Fastvold starring Katherine Waterston and Vanessa Kirby; two finely- tuned, intelligent women in boorish marriages, narrowly earning a livelihood in 1856; farmland unrelenting in its ruthlessness; even the fittest scarcely survive; as told through the eyes of journalist “Abigail” (Waterston) whose husband, “Dyer” (Casey Affleck) oblivious to his wife’s needs, stimuli, desires, expects only her daily chores be attended to; neighbors invade their isolated terrain and Abigail meets her soulmate “Tally” (Kirby) luridly luscious, with discerning acuity, matching Abigail’s poetic insightfulness, slowly, soothingly the women discover the meaning of existence, fulfillment in their restricted, constricted, 19th century, censored milieu.

In recent films women of substance have had their sexual preferences splayed across the screen: “Blue is the Warmest Color”, “Portrait of a Lady on Fire”, “Ammonite” all intriguing, analytical studies. “I Care a Lot” unfortunately, is a sensational vapid spoof, lacking the entrails of a fine “portrait”,  but guarantees Pike’s exponential rise in Hollywood and its myriad of pastures yet untrammeled.