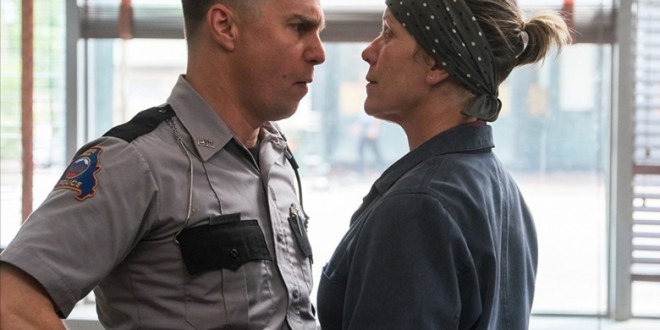 Frances McDormand is an unprecedented force, a presence, not to be tinkered with, terrifying in her role as “Mildred Hayes”, distraught, grieving mother, crippled emotionally, chastising the minimal police force, especially “Chief Willoughby” (Woody Harrelson Harrelson gives a surprisingly empathetic performance) in their lack of initiative, in capturing the culprit who savagely murdered her daughter “Angela” (Kathryn Newton) seven months prior; three billboards, on a little used road in Ebbing, Missouri are the tools, enabling Mildred’s quest for justice and retribution, an attempt to keep Angela’s unsolved death in the public eye.

Mildred’s vigilantism, fury pushed to the precipice, defying parameters, bleeds to the extreme; heartless, cruel, unkind, even malicious; she is held accountable, in a magnificent scene with “James” (Peter Dinklage, “Game of Thrones”) a dwarf, smitten with her churlish demeanor, who, despite her animosity, has provided an alibi for her egregious, punitive behavior.

“Three Billboards Outside Ebbing, Missouri” paints portraits of flawed, troubled,  average individuals, living within the confines of their tiny town, ill-equipped for the atrocity visited upon them; luminous performances, in the end transcend the tale.