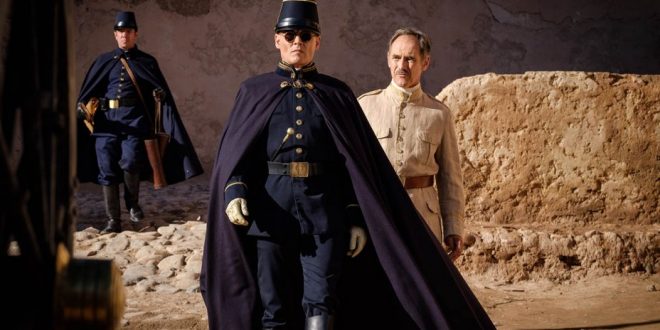 WAITING FOR THE BARBARIANS (AMAZON PRIME)

Based upon J.M. Coetzee’s 1980 novel of the same title is a giant metaphor for imperialism in any form and the country it infects; Great Britain, the crowning imperialist, gobbled chunks of: 13 American colonies, Canada, India, Australia, New Zealand and Africa; we do not have to wait for the “barbarians”, they arrive instantaneously in the guise of “Colonel Joll” (a trussed, stuffed, hardly recognizable Johnny Depp) whose amoral, soulless, tortuous behavior ignites the ire of dignified “Magistrate” (superb Mark Rylance) of this unknown, desert enclave; their performances lend legitimacy to, at times, a translucent plot; the Magistrate is the archetypical man of reason, understanding and governing with keen sensitivities, his populace; benign peace, replaced by sadistic, outrageous conduct. Cinematographic perfection balanced by “man’s inhumanity to man” reminiscent of Nazi Germany, apartheid (Coetzee is South African) pulsates with religious symbolism and its distortions.

Excruciating, but mesmerizing, director Ciro Guerra (“Embrace of the Serpent”) captivatingly depicts the atrocity of one nation subjugating another, demolishing their republic, leaving a devastated, ravaged, vengeful society; “Waiting for the Barbarians”, stuns with its relevance, elucidation in today’s pandemic milieu.