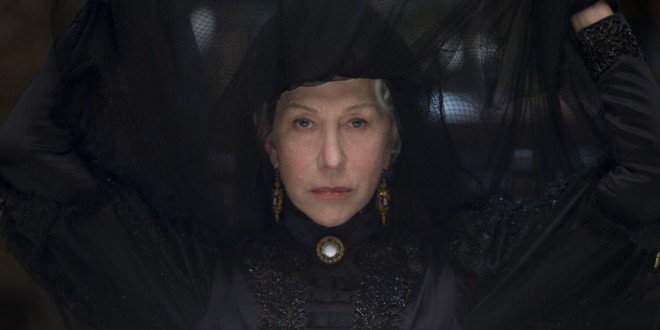 Why? Why would two credible actors decide to star in this maladroit attempt at the horror genre? Was it the charm of director/brothers Michael and Peter Spierig? Academy Award winner Dame Helen Mirren might have been enticed by the enigmatic Sarah Winchester (1840-1922), daughter-in-law of Oliver Winchester (1810-1880) founder of the Winchester Repeating Arms Company; her daughter Annie died after 48 days and her husband William (1837-1881) passed at forty-three; bereavement led to a study of the occult, the spiritual guidance of mediums and eventual purchase of a home, on vast acreage, in San Jose, Ca.; she built, rebuilt, regardless of nature’s dictates, 24/7, hundreds of rooms housing the spirits of the Winchester rifle’s victims and perpetrators. Sarah with the aid of her voluminous fortune, designed the rooms, decorated lavishly with Tiffany lamps and chandeliers; her devoted staff perpetually protected her from voyeuristic neighbors and tourists.

Using poetic license “Dr. Eric Price” (Jason Clarke) with his troubling “death” hubris, is hired by the Winchester Board to verify Sarah’s mental acuity and determine whether a financial intervention should be initiated. Both Mirren and Clarke struggle, unsuccessfully, to ward off ridiculous hurdles, lurking in haunted corridors, closets and imprisoned bedrooms; silly apparitions abound, but nary a spine-tingling chill.

Viewers would be better served by googling the “Winchester Mystery House” a 1963 Documentary narrated by actor/writer Lillian Gish.