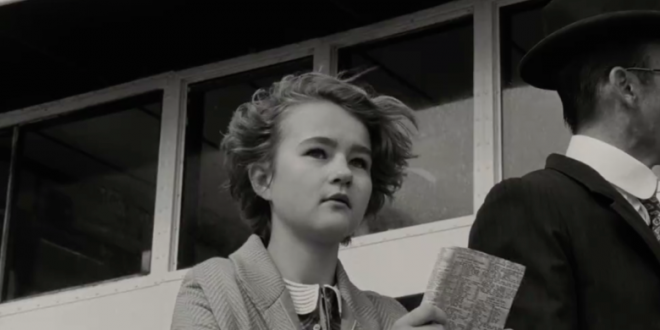 Based on the illustrated novel by Brian Selznick and directed by Todd Haynes (“Carol”) “Wonderstruck” defies demographic categorization; required enchantment, escapism for all audiences. It leaves viewers confirmed in film’s absolute, transformative power. Two children, a boy and a girl, at approximately the same age; generations apart, 1927, 1977; “Ben” (Okaes Fegley), (1977) after the loss of his mother “Elaine” (Michelle Williams), his father unknown, is rendered deaf by lightening; goes to New York, searching for his dad, his only clue, a bookmark from “Wonderstruck” purchased at the American Museum of Natural History;  the film beautifully intertwines New York of the late 1920’s with “Rose”, deaf from birth (Millicent Simmonds, phenomenal performance by a deaf actor) who flees to New York city, in search of her famous mother (Julianne Moore). Outstanding cinematography by Edward Lachman using 35 millimeter film, mimicking silent black and white movies, streets scenes, with the gritty color of the 1970’s era, (“The French Connection”).

“Wonderstruck” is profound on a myriad of levels: silent segments, focusing on the faces of the protagonists, lure viewers into the imaginative, inventive minds of the filmmakers;  the chasm of incompleteness a child feels when rendered parentless; the purity of a world minus cacophonous distractions, aching, soundless days inform their frustrated, challenged communication, but intelligence motivates their survival; finally “memory” is history’s lifeline, what sets us apart,  a required element in nurturing antiquity.

2017-10-29
Peneflix Admin
Share !
Previous: LOVING VINCENT
Next: THE KILLING OF A SACRED DEER