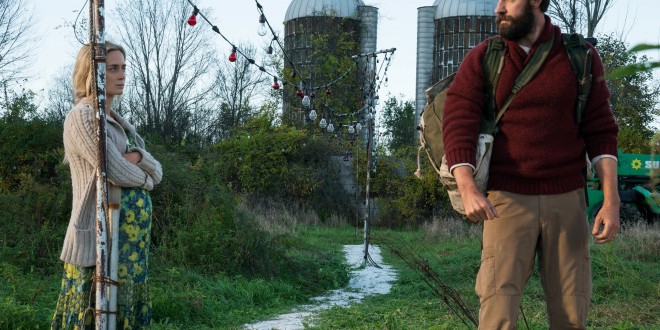 Mesmerizing, hypnotic, powerful, original scenario, classified in the “horror” genre; director/writer/actor John Krasinski’s ingenuous portrait of survival, consummate love and strength, despite plummeting odds, is a tableaux of unparalleled, pervasive torture and fortitude. The Abbott family, soundlessly scavenges for sustenance in a desolate grocery store; communicating by signing, barefoot, filthy, their youngest of three children covets a toy airplane. Within minutes we know the reason for their quietude; the universe has been invaded, destroyed by astral creatures that attack and cannibalize when silence is interrupted. “A Quiet Place” is an enervating cosmos without laughter, conversation; redolent terror, panic informs the essence of their existence.

“Lee Abbott” (Krasinski’s performance is profound), a stringent, loving father, reminiscent of “Itus” the Greek god of protection, his vigilance appears harsh, but circumstances demand his perpetual surveillance; “Evelyn” (real life wife of Krasinski, Emily Blunt) astoundingly perfect as an example of Goddess “Demeter”, mother, nurturer; without words she conveys her cavernous devotion to her family. Millicent Simmonds, (“Wonderstruck”), hearing impaired, is remarkable as “Regan”; her disability enabled her family to communicate in sign language, hence escape the aerial critters for days, months. Noah Jude  (“Wonder”), “Marcus”, the youngest and engagingly vulnerable, proves his resilience in the absolute trial.

Haunting music by Marco Beltrami and superb cinematography by Charlotte Bruus Christensen (“Fences”, “A Girl on the Train”) lend an apocalyptic aura to “A Quite Place”; it is the acting that transcends the grotesque; Evelyn’s exhaustive, excruciating birthing scene, emotionally pulverizes viewers; Blunt’s otherworldly depiction of “suffering in silence” tips the scales in magnitude.

It not as much fear, but awe, that “A Quiet Place” inspires.