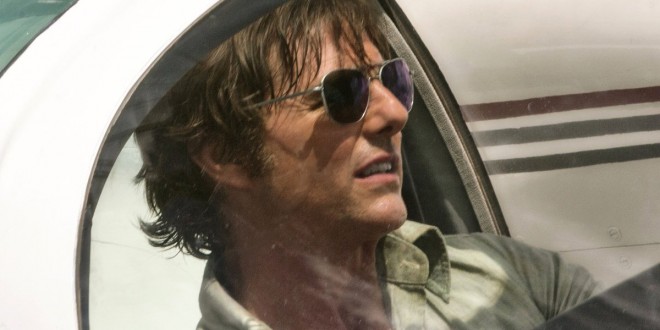 Since 1983’s “Risky Business” I have been a major admirer of Tom Cruise; his fearlessness in role selection, never giving a half-hearted performance: “Rain Man”, “Top Gun”, “Jerry Maguire”, but one of the greatest filmic portrayals of all time is his depiction of Ron Kovic in 1989’s “Born on the Fourth of July”, gut-wrenching, metamorphic display of a paralyzed, crazed Vietnam war veteran; from pro to anti- resolve, he mesmerizes.

In “American Made” Cruise, with inimitable skill tackles TWA pilot, Barry Seal’s story of being recruited by the CIA to fly reconnaissance missions over Central America, leading to the birth of the Medellin cartel and the Iran/contra outrage; the clandestine photo ops expand to gun and drug smuggling and Barry’s burgeoning wealth and hazardous safety issues.

The most compelling scenes are the perilous flights (Cruise legitimately piloted the plane) over “no-fly” terrain;  beauty eclipses the lethal landscape.

Monty Schafer, Barry’s CIA handler; Domhnall  Gleeson is glibly, obsequiously appropriate as the slippery fellow, a chameleon of every hue.

Barry’s wife “Lucy”, luscious, naïve depiction by Sarah Wright who cavalierly accepts the money sprouting from every crevice of their household.

Mauicio Mejia imbues Pablo Escobar with charming, insidious guile; he toys with life as if you shed one for another; prime dictator of Barry’s future.

For all of Cruise’s protean efforts the result is stale rather than substantive; we are immune to government’s subterfuge, illegal, furtive operations, a euphuism for the “greater good; Seal is championed, and I am still rooting for Tom, but “American Made” will not gift him the “gold”.