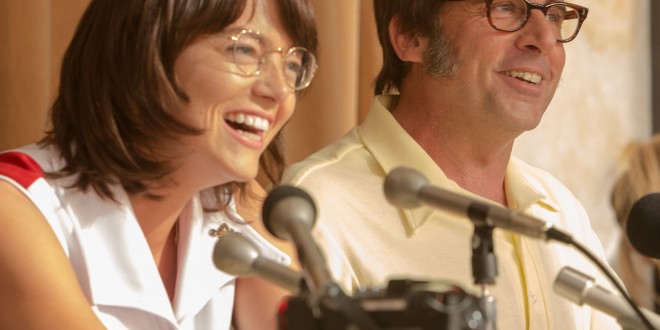 BATTLE OF THE SEXES

This film could not have been made in 1973; 44 years hence directors Jonathan Dayton and Valerie Faris gift movie-goers, more than a historical, ground-breaking tennis match but a compelling, introspective study in self-discovery. Emma Stone and Steve Carell soar as the legendary Billy Jean King (1943-) and Bobby Riggs (1918-95), making it difficult to differentiate between the real and their doppelgangers; the iconic, perception-pulverizing match is pristinely, superbly replicated; knowing the outcome does not diminish the thrill.

Billy Jean attributes “self-awareness” as the key component in the creation of a champion; “Battle of the Sexes” is revelatory on many levels: massive physical demands of a professional athlete; in an age of same/sex marriage, the painful tribulations of its pioneers; the vast courage required in separating from the “norm”, recognizing that “the strongest steel is forged in the hottest fire” ultimately finding equanimity and peace.