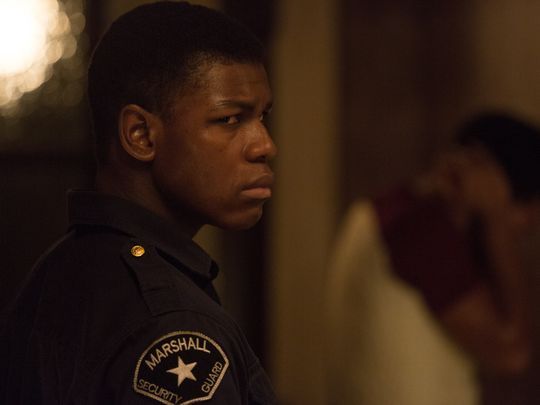 Kathryn Bigelow’s brazen and brutal depiction of the 1967 riots in Detroit, Michigan focuses on the slaughter at the Algiers Motel on the night of July 26th, 1967. Emotionally pulverizing (many left the theater), this film was overwhelmingly difficult to sit through; a supreme case of; “man’s inhumanity to man”;  “Krauss” (egregiously evil portrayal by Will Poulter) with a Howdy Doody countenance uses his badge of authority to degrade, dehumanize and ultimately murder three unarmed teenage boys.

Detroit, suffering through horrific upheaval, violent rioting and looting, gave license to the police force, National Guard and Army; ignoring common rules of behavior, they exercised virulent racism, subhuman treatment to any and all blacks they encountered; it was a sickening display of unaccountability; Anthony Mackie and Algee Smith give superb portrayals of victims “Green” and “Larry”, survivors of the night of the infamous Algiers Motel massacre but forever altered. John Boyega, “Melvin Dismukes” a security guard, tries to straddle the grey area between the police and motel occupants; troubling and problematic role because one wrong move/ misplaced word, he would have been killed; lawlessness and vigilantism thrived.

No matter the intention, it is impossible for a white person to completely comprehend a person of “color’s” experience in a milky world; Kathryn Bigelow’s “Detroit” steamrolls,  bludgeons viewers sensitivities, leaving one appalled that such cruelty, fiendishness existed in America, in the twentieth century.