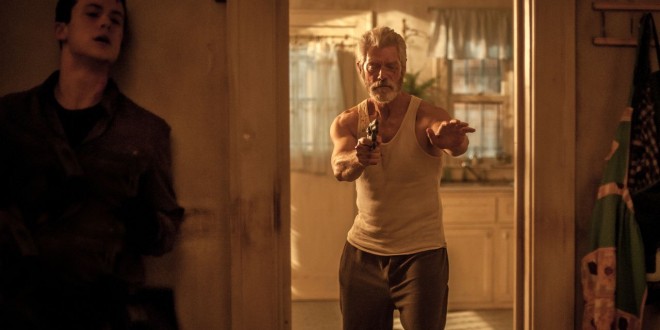 Directed by Fede Alvarez “Don”t Breathe” is a thriller, not a “horror” movie; there are no “Freddy’s”, Michael’s”, headless horsemen resurfacing after multiple stab and gunshot wounds, to stalk again; the protagonists are viable and the scenario is realistic and terrifying.

Set in a decaying section of Detroit, three malcontents, yearning for a better life in California, have resorted to a life of petty thievery to finance their relocation. “Money” (Daniel Zovatto), “Alex” (Dylan Minette), “Rocky” (Jane Levy) plan the ultimate heist, robbing a blind man (Steven Lang) of monies he received after his daughter was killed.

From its commencement viewers recognize the lack of timidity exercised by the blind man and his vicious companion, a blood hungry dog; the ingénue thieves are unaware and unprepared for what awaits them; their illegal trespassing renders them potential targets of a man protecting his home, financial largesse and ugly secret. The power of the scenario lies in the swaying of empathy between the intruders and the victim; their proclivities, personalities slowly surface as the danger escalates.

2016-08-31
Peneflix Admin
Share !
Previous: HANDS OF STONE
Next: THE LIGHT BETWEEN THE OCEANS