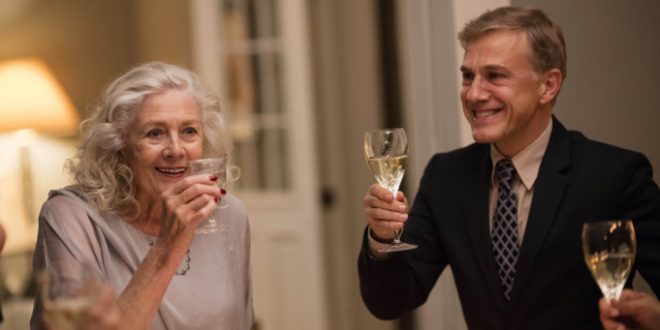 Christoph Waltz in his directorial debut and starring as the obsequious, uxorious “Ulrich Mott” (loosely based on the murder of socialite Viola Herms Drath) validates, once again, his transformative powers; with chameleon aptness he imbues Mott’s pathological gallantry with slithering, scintillating charm; he convinced Washington Grand Dame, “Elsa Brecht”, (indomitable Vanessa Redgrave) besting him by forty years, to become his wife and ingress into a realm of acceptance, elitism, verboten because of his adulterated background; his genius centers on the “tangled web he weaves” when he perpetually “practices to deceive”; his toxicity infects his preposterous schemes, duping his wife but not his daughter-in-law, “Amanda” (divine Annette Benning) who sees through his conniving, scandalous contrivances.