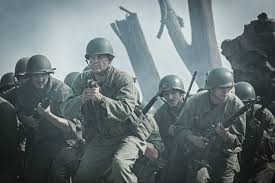 Thousands of lives were claimed in the battle for Hacksaw Ridge, Okinawa, Japan, 1945; Mel Gibson’s stunning, at times sensational film, based on the life of Desmond Doss (1919-2006), a bona fide conscientious objector, is brutally, savagely told. Desmond Doss, remarkably depicted by Andrew Garfield, in a profound, prescient performance. Doss, the son of an alcoholic, abusive father, a veteran of the Great War, shunned all violence as a Seventh-day Adventist; the Bible, an extension of his spirited beliefs; he turn he felt an obligation to enlist and visit the horrors of the battlefield as an Army medic. Based on viable accounts, he suffered massively from his superiors, fellow trainees: bullying, beatings, ostracized, he remained stalwart, intransigent in his resolve not to touch a gun. Garfield, with subtlety, strength, sincerity captures Doss’s deepest respect for mankind, regardless of ethnicity, strived to save Japanese soldiers; he never vacillates in his valiancy, saving as many wounded as possible; he prays for ” just one more” as he lowers from the Ridge’s peak, in astonishing footage, one wounded soldier after another, exhibiting celestial heroism. Gibson glamorizes Doss’s achievements, but they are worthy of awe-inspiring esteem.

Supporting roles soar: Teresa Palmer as Doss’s girlfriend/wife Dorothy is enchantingly beautiful, realistically embracing her character’s dedication and love for the unusual Doss; Vince Vaughn, as Sergeant Howell, displays his gift for levity, irony and surprise as he watches Doss’s heroism come to the fore; Hugo Weaving and Sam Worthington imbue Desmond’s father and Captain with the perfect dosage of angst.

“Hacksaw Ridge” pulsates with inordinate carnage, flirting with comparisons to “Saving Private Ryan” and Gibson’s “The Last Temptation of Christ”; war is butchery, the savagery is legitimate.

Ralph Waldo Emerson said “a hero is no braver than an ordinary man, but he is brave five minutes longer”; Desmond Doss’s messianic courage lasted for hours, saving seventy-five lives, winning the Medal of Honor. Mel Gibson’s film justifies the sanctity of a “Conscientious Objector”, for that alone, regardless of his prior transgressions, he should be applauded.