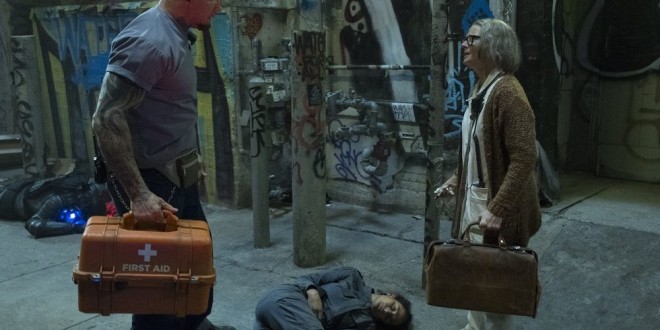 In Greek mythology the goddess “Artemis” (daughter of Zeus, twin sister of Apollo) is a “protector”, a hunter, an all-round athlete, an accomplished maiden in all endeavors. Director/writer Drew Pearce had to be aware of the mythic implications when naming a hotel, that in actuality is a hospital, for the untoward, in 2028; as in most dystopian films, lawlessness reigns, landscapes are decimated and cleanliness has disappeared with godliness.

Jodi Foster (her first film in five years and the only reason for a Peneflix sighting) plays “Nurse Jean”, catastrophically old, alcoholic, strictly running an establishment for the maimed ne’er do well, who because of their recidivism, have memberships; chaos avoided with the help of mountainous “Everest” (Dave Bautista). Most of the “patients”, named after places, suffer from the effects of their criminality; some familiar screen presences populate the “hotel”: Sterling K. Brown, Charlie Day, Jeff Goldblum, but it is Sofia Boutella, “Nice”, subtly svelte, who captivates and in many ways anchors the action, an assassin who kills only the highly infamous.

“Hotel Artemis” will struggle on “life support” for a couple of weeks, then be resuscitated, in a couple of months, ON DEMAND.