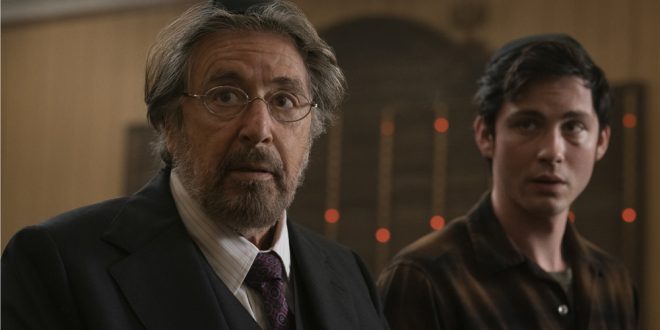 Loosely based reality series focusing on the United States involvement in the recruitment of Nazi scientists after the second world war and their elimination by Nazi hunters, in 1977, New York; disturbingly flawed, transitionally defective, but keenly acted by a number of the protagonists: Al Pacino is dynamic as “Meyer Offerman”, a Holocaust survivor, meting vigilante justice to the profoundly wicked, disguised as faithful Americans; Logan Lerman’s jejune performance, lacks grit, as the grandson of Holocaust legend “Ruth Heidelbaun” (Jeannie Berlin gives a substantial depiction in minimal minutes); evildoers, hunted, are far more interesting than the justice seekers: Greg Austin, tips the scales as the prototype of “Hitler Youth”: “Travis Leich”, unscrupulous, unprincipled, succulent as a bigoted, amoral follower of the warped “Protocols of the Elders of Zion”, fabricated text propagating antisemitic poppycock; Lena Olin is deliciously daunting as “The Colonel/Eva”,  leader of the poisonous pack fostering the birth of the Fourth Reich; it is Dylan Baker as devilishly obsequious “Biff Simpson” a Washington insider, that kills at whim, manipulates with impunity and slithers from one dubious scheme to another, adding a dimension, skimpily rendered in the majority of principals.