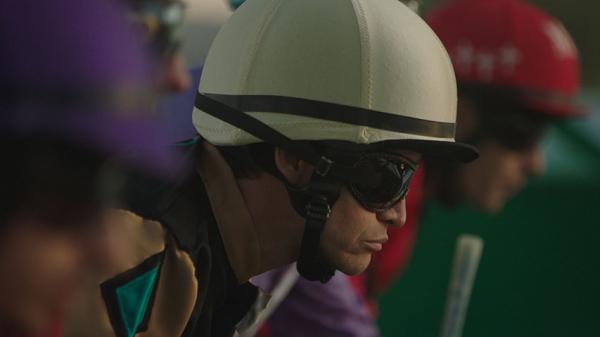 Director Clint Bentley’s flawlessly compelling film pulsates with refinement as did 2017’s “The Rider”; there is nothing more satiating, or fulfilling than viewing a mistake-free movie as it races to its finality; “Jockey” with knowledge, sensitivity and truth gifts viewers the “inside scoop” of a jockey’s existence: dedication, starvation, bulimia, fractured bodies, camaraderie among peers, and the enigmatic bond, intimacy between man and beast; Clifton Collins Jr., stars as “Jackson Silva”, weary, damaged but intent on one final victory before retiring; x-rays forecast his ultimate disability; Collins is stratospherically remarkable in the role (a Willem Defoe lookalike, he’s been on the screen for years: “Hillside Strangler Murders”, “Dirty”, “Once Upon a Time in Hollywood”) and in “Jockey” proves his depth as a man in total control of his oeuvre; riveting, pristinely emotive, dominating, embracing his every filmic scene. Keen and well-defined performances anchor “Jackson’s” dilemma: Molly Parker, “Ruth” owner, trainer, entrusts Jackson to ride her savant equine into historical iconography, and Moises Arias, “Gabriel”, a possible heir of Jackson’s legacy.

As a child I accompanied my father to the racetrack, a venue of instant gratification, where, within minutes, the winner was championed, and those with the positive bet, collected their winnings; watching “Jockey”, reminiscent of times long gone, reminded me of the thrilling, titillating moments when man and his mate symbolized a scripted partnership.