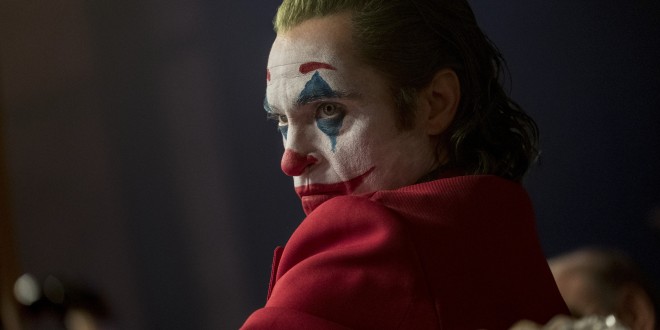 This image released by Warner Bros. Pictures shows Joaquin Phoenix in a scene from "Joker," in theaters on Oct. 4. Alarmed by violence depicted in a trailer for the upcoming movie “Joker,” some relatives of victims of the 2012 Aurora movie theater shooting asked distributor Warner Bros. on Tuesday to commit to gun control causes. Twelve people were killed in the suburban Denver theater during a midnight showing of the Batman film, “The Dark Knight Rises,” also distributed by Warner Bros. (Niko Tavernise/Warner Bros. Pictures via AP)

Joaquin Phoenix joined the corps of actors who shed massive pounds to authenticate the viability of their characters; this was my first hint that “Joker” would disappoint, whatever the poundage “Joker” is a misfit of monumental proportions; as a hired clown, he is a terrifying, pitiful, misunderstood fool; his neurological, incessant laughter grates on all bombarded, tormented with it (including viewers). Director Todd Phillips, denies any attempt to incite, but has splayed upon the screen an anarchistic, amoral society (“Gotham”) where murderers are hailed and imitated, especially when killing anyone whose achievements have garnished a modicum of success (“Bruce Wayne’s” parents); Wall Street (always portrayed pejoratively) boys have earned their slayings, justifiable homicides, viciously executed by a demented clown. Phoenix’s “Joker” hypnotic and revolting, secures his place as one of the finest method actors of his generation. Problematic, are his choices.

“Joker” is an abyss, a bacteria, its fermentation infects viewers; cruelty, monstrous pain oozes from its filmic pores, driving one to seek inoculation from its poisonous, insidious message.