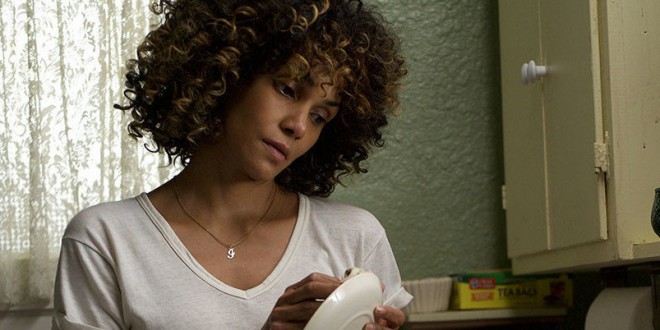 The single redeeming factor of  director/writer Deniz Gamze Ergoven’s (“Mustang”) “Kings” is the archival footage of the March 3rd, 1991 beating of Rodney King and the subsequent riots on April 29th, 1992 after three police officers were acquitted of the crime; South Central L.A. suffered a conflagration of catastrophic proportions; one of the bleakest, historical stains of the twentieth century.

Nonsensical and ludicrous is the pairing of Halle Barry and Daniel Craig, as neighbors in a “hood” riddled with crime, unaccountability, devastation; “Millie” (Barry) a heroine of epic proportions is “just too good to be true”, saddled with eight children, rises at dawn, bakes cakes; uncomplaining, sleep-deprived, she strives for discipline that is never requited. “Obie” (Craig) cantankerous, belligerent; their bitter bantering, foreplay for what’s to develop. Problematic is an English bloke living in this part of town?

Overly ambitions, “Kings” fails miserably in the comedic arena; the twosome, handcuffed to a light pole, solidify their flirtation.

Alone, in a cavernous theatre for two hundred, after 92 minutes, I knew why.