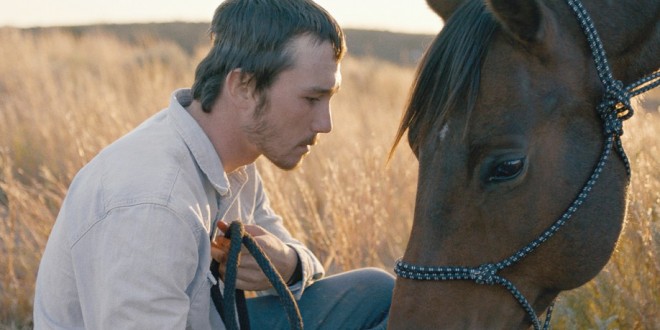 There’s a quiet serenity, gentle integrity informing the entirety of this autobiographical movie; real people recording a traumatic, life-altering episode in their lives; Brady “Blackburn”(Jandreau) a Lakota Sioux cowboy, plays himself; he has sustained a severe head injury in a rodeo ring, his performance is staggering in its sincerity, not an ounce of self-aggrandizement, or pity touches his young spirit; his father and sister (Tim and Lily Jandreau) comport themselves in equally fine and genuine characterizations.

Writer/director Chloe Zhao’s brilliance lies in her understanding of the devastation suffered by a man whose life is defined by horses; they are his education, his love, that is all he knows and wants to know; facing a future, without the frenetic high of the untamed, bucking broncos is nakedly bleak, vacuous, terrifying. Set in the magnificent, unforgiving Badlands of South Dakota, a landscape that hones man’s strengths, intolerant of his weaknesses; Brady is the keenest it has to offer; his heart-wrenching innate kindness shown to his sister and invalid friend, is achingly, exquisitely real.

But it is Brady’s relationship with horses, especially “Apollo” that takes one’s breath away; more than a “horse whisperer”, he excavates, delves into the horse’s mentality; their eyes and touch find common ground, mutual respect, profound trustworthiness; these scenes prove Zhao’s skill in filmmaking and Brady’s stratospheric naturalness as an actor.

It is rare when one exits a film, realizing that one is better for having seen it.