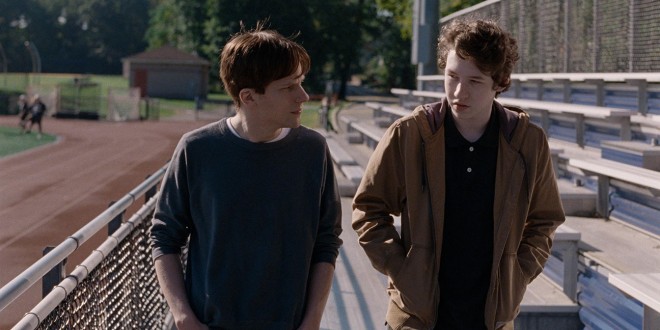 2013’s “A Thousand Times Good Night” starring inimitable Juliette Binoche, as a conflict photographer, is a prescient study of the psychology resonating at the core of the addictive allure of a war zone; why the magnet is so compelling, enthralling, that without its adrenalin, existence is transformed into a benign, bleak vacuum; even loved ones cannot lighten the murkiness.

“Louder Than Bombs”, directed by Joachim Trier, never takes a defined stance on it mission as a film; is it about suicide, its side effects on the survivors, or destructive depression of wartime pictorial recorders?

Isabelle Huppert, in another joyless role, glumly portrays “Isabelle” an award winning photographer whose life, off the battlefield,  is too overwhelmingly empty to pursue; Gabriel Byrne, “Gene” her stoic husband, moves through his professorship, parenting and life, as if Prozac-infused; Devin Druid,  younger son, “Conrad” is unaware of the parameters of his mother’s death, but appears suicidal nonetheless and Jesse Eisenberg “Jonah”, has it all: PhD, beautiful wife and baby, but unnecessarily flirts with disaster.

The film flounders with too many unanswered questions, and generates no compassion or empathy for any of the protagonists.