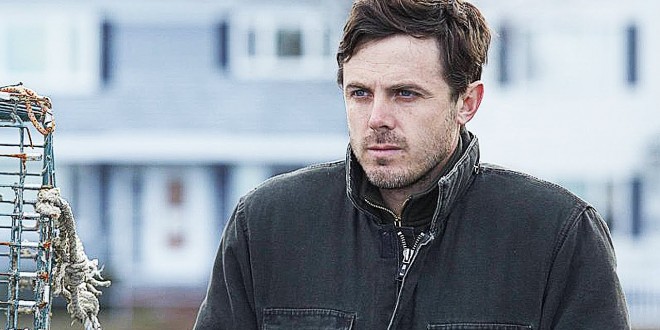 MANCHESTER BY THE SEA

Casey Affleck is grippingly profound as “Lee Chandler” a man whose spirit is fractured beyond redemption, no emotional, psychological surgery can mend him, damaged irrevocably, feeling alive when he instigates fights, beaten bloody, a temporal penance worthy of his egregiousness;  a handyman, fixing the pipes, toilets, electricity of meaningless urban occupants, living in a squalid, solitary room, is named the custodian of his nephew when his brother, “Joe” (strong, solid Kyle Chandler) dies of congestive heart failure.

Director Kenneth Lonergan’s masterful “Manchester by the Sea” is unique in its concentrative study of male angst and incapability of expressing pain; Lee is a mess, his older brother Joe, a constant in his life, aware of the magnitude of placing his sixteen-year-old son “Patrick” in his less than adequate hands. Magnificent balance between teenaged “Paddy” (stupendous, Lucas Hedges) whose maturity outweighs his uncle’s by spades; he is everything a father would want in his progeny: hockey player, good student, musician, a neophyte in “basement business” with two girlfriends; Paddy portrays the chasm created by the death of his father with tremendous dignity, politeness; his anger towards his uncle eventually explodes, evaporates. The scenes between the two resonate with frustration, non-communication, but ultimately mutual understanding; realistic to the core, minus sensationalism, unforgettable.

Michelle Williams, a pivotal keg in the scenario, depicts Lee’s ex-wife “Randi” with wounded graciousness; time has softened but never dimmed her agony, she is defined and made sacred by her sorrow.

Viscerally lacerating “Manchester by the Sea” confounds with its message: there are acute, penetrating circumstances that one can never move beyond, where every breath seems an injustice, each sunrise, a nail in the wound.