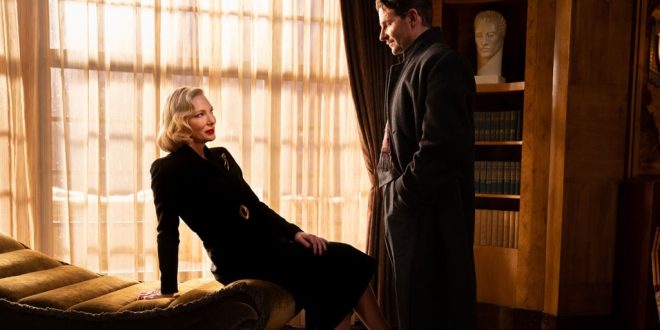 Director Guillermo del Toro’s negligibly flawed film is mesmerizing nonetheless; based on the novel by William Lindsay Gresham, “Nightmare Alley” scores the unwholesomeness, uncleanliness of depression era carnivals, billets of misfits, freakish oddities, disenfranchised souls floating from one seedy backwater town to another; terrifying how comfortable the participants are, living on the edge, relishing their depravities; Willem Dafoe is devilishly divine as “monster maker”, “Clem Hoately”. Into this bizarre milieu wanders “Stan” (Bradley Cooper’s performance dazzles, imprisoning the complexities of a man determined to ignore and rise above his travails) adaptable, comfortably cunning, quick to manipulate the susceptible, creating a mind-bending mentalist act, skillfully crafted, the gullible sucked into his charming web; Cooper grasps the intricacies of Stan, a man of innate ability, a born grifter; his “teacher” “Pete” (David Strathairn gives a noteworthy, outstanding example of a man who drinks too much and longs to be untethered from his past) gifts, with warning, the code to duping his audience; this part of the movie was notably educational. Stan’s partner, “Molly”, weaned from the carnival (Rooney Mara combines the hardened shell of a veteran “carney” with a compass of moral turpitude) she notices the fissures in Stan’s veneer as his reputation climbs, but especially when he meets “Lilith” (Adam’s first wife, dumped for her feistiness’; Eve a docile replacement), Cate Blanchett is robotic refinement, a practiced psychiatrist with her own agenda for arrogant, hubristic “Stan”; the scenario flounders, unsuccessfully flaying the expected, density loses its potency but regroups in the finale. Del Toro allows Stan free rein to soar, flirt with the celestial, morph into a supernova and script his own universe. Cooper is consummately effective.