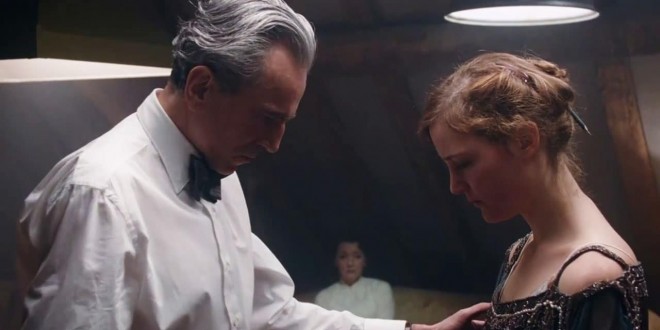 From the onset there is a romantic perversity luridly lurking at the core of each scene; at times clandestine, oftentimes overt, always lusciously tantalizing a mesmerized, unsuspecting viewer.

Writer/director (P)aul (T)homas Anderson’s “Pygmalion” scenario goes deliriously, deliciously awry. “Reynolds Woodcock” (astounding Daniel Day-Lewis) a nascent fashion designer for the rich and titled in 1950’s London; effete and imperially slim, fastidiously flawless, is sovereign in his professional and personal life, haunted by the loss of his mentor/mother; he suffers no fractures in his routines, discarding lovers like scraps of detritus from the cutting room floor. He is protected, shielded by his sister “Cyril” (formidable Lesley Manville), co-founder of the “House of Woodcock”; their symbiotic partnership is disrupted with the arrival of “Alma” (magnificent Vicky Krieps) a waitress that Reynolds fancies he can mold from an “Eliza Doolittle” into a proper model of his creations. Krieps’s skill resides in her chameleon acuity to morph from drab to bewitching, with a twist of the head, a hypnotic  smile.

“Phantom Thread” masterfully beautiful in its execution, reminiscent of Irving Penn’s iconic photography, subtlety leaves the dimensionless world of appearances, to the inner mechanisms of Reynolds and Alma’s relationship; a battle of wills ensue,  Alma refuses to be tamed, able to tolerate Reynolds’s intransigence, their roles compromised, resulting in a untoward, unholy solution; the thimble, a benign seamstress tool, becomes the metaphor for love, death and commitment.

Anderson excavates the bleakest reservoirs of the human condition; hovering beneath the initial attraction, captivating sexuality; what compels individuals to remain entrenched, determined to hold the course?