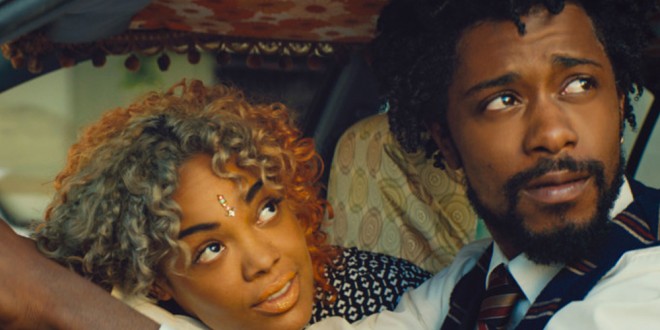 SORRY TO BOTHER YOU

Powerful. Provocative. Problematic. Boots Riley, in his directorial debut, pushes the boundaries between contemporary consumer culture, science fiction and disparities between black and white perceptions of today’s world. Massively metaphorical (reminiscent of “Get Out”) the film commences with “Cassius Green” (outstanding, Lakeith Stanfield, “Get Out”), financially-strapped, he applies for a position at a telemarketing firm; lusting for success and approval he adopts a “white man’s cadence” and soars to the “Power Callers” level, abandoning his integrity in the process. He represents the proverbial successful “ladder” ascent, lending authenticity to those trampled by the climb. His girlfriend “Detroit” (magnificent Tessa Thompson) a street performer and artist without delusions, profoundly secure, is Cassius’ conscience, muse, igniting his eventual epiphany.

Cassius is invited to the home of “WorryFree”, founder, “Steve Lift” (electrifying performance by Armie Hammer), promoting a lifestyle, similar to “Downsizing” of benign atmospheric perfection; Lift is the poster-boy for corporate greed, egregious manipulation of the human DNA; Cassius is terrified after sniffing an innovative hallucinogen; his educative attempts to alert the populace backfire and the film spins cytologically into the incredulous.

A leap of faith is required to stay in the surreal imagination and premise of Boots Riley; messages, both bludgeoning and subtle lend a disquieting aura to “Sorry to Bother You”; squeamishly leaving, aware of the veracity and fallacy behind Riley’s missive, incapable of differentiating between the two.