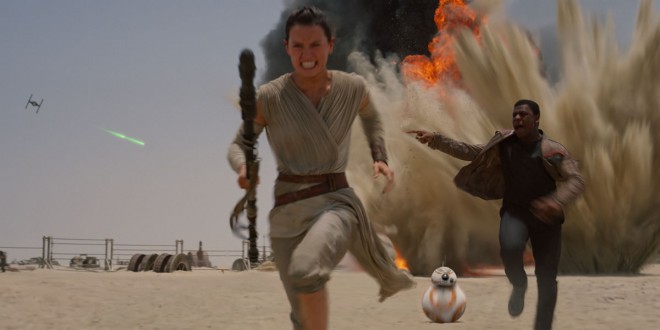 Reunions. They are a fact of life: schools, sororities, fraternities; encroaching, looming every five or ten years; once the decision to attend is made, the dieting, exercising, spa days grow exponentially with the magnitude of the number; culminating in disappointment once the event, infused with unrecognizable peers and jejune conversation, has fizzled and one heads home to microwave the frozen pizza neglected, but not forgotten. Such is how I felt watching J.J. Abrams “Star Wars: The Force Awakens” . “Han Solo” (Harrison Ford) and “Princess Leia” (Carrie Fisher) looking good, but shadows of their former, romantic characters; the fantasy of their previous adventures shattered; reality of living mapped on countenances once luminous, now just distinguished.

The film’s credibility lies in the, all too infrequent, familial conversations. “Kylo Ren” (fascinating, substantive portrayal, finest in the movie by Adam Driver) and Han come to terms with their destinies.

Fortunately all the little, endearing mechanical characters have remained ageless: Droid, C3PO, R2-D2,  raising the comfort level for those who’ve followed the “Star Wars” franchise since 1977. It has been a fantastical journey, one that I wish would have remained dormant.