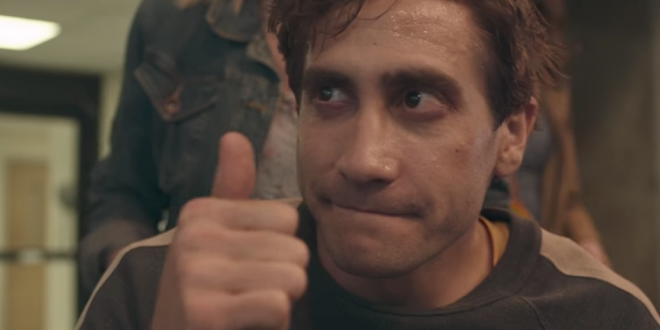 Jake Gyllenhaal, whose star-power has been ignored by the Academy (“Jarhead”, “Southpaw”, “Nightcrawler”, “Nocturnal Animals”) gives a dazzling, perceptive performance as Jeff Bauman, whose legs were severed on April 15th, 2013, as he waited for his girlfriend, Erin Hurley, at the finish line of the Boston Marathon. His is the story of a young, happy man, living mundanely in the outskirts of Boston; in simple terms, we should never have met him; he should have lived his life, making ends meet, marrying, divorcing, celebrating and bemoaning Red Sox victories and losses, swilling beers with his friends. Fate and its “fickleness” had other plans when psychopaths intervened, and annihilated Jeff’s anonymity and individuality.

Director David Gordon Green, without sensationalism, depicts the mental, physical, psychological journey of an average man, poll vaulted into extraordinary circumstances, an unknown, whose life is cauterized in seconds; depleted by the media’s lionization, Jeff, suffering overwhelmingly from PTSD, struggles with alcoholism, a complicated relationship with Erin (heart-wrenching portrayal by Tatiana Maslany) and a mother, Patty, (terrific, Miranda Richardson) a quasi but well-meaning alcoholic who relishes the unexpected fame visited upon her physically diminished son.

Gyllenhaal spent copious hours with Jeff, and compellingly captures the man’s insecurities, vulnerabilities, and fathomless love for Erin; it is her strength and devotion that ignites his path to healing, moving beyond his plight and pain; “Stronger” at its core, is a love story.

In the words of Christopher Reeves “a hero is an ordinary individual who finds the strength to persevere and endure in spite of overwhelming obstacles”; Jeff Bauman, dauntlessly displays to the world the staunch resolve, that regardless of whatever horrors are dumped upon our democracy, they shall never overcome.

2017-09-23
Peneflix Admin
Share !
Previous: FIRST THEY KILLED MY FATHER (NETFLIX, AND IN THEATRES)
Next: VICEROY’S HOUSE (ON DEMAND & IN THEATRES)