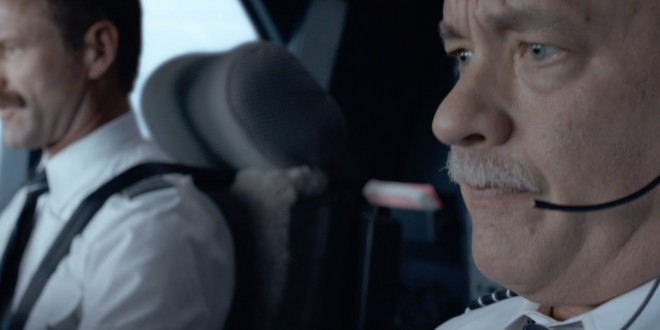 Captain Chesley B. Sullenberger’s interview by Charlie Rose aired on September 9th, the day the film “Sully”, directed by Clint Eastwood and starring the inimitable Tom Hanks, as the man who miraculously landed on the Hudson River January 15th, 2009, saving all 155 passengers, opened in theatres nationwide; Captain Sullenberger’s interview illuminated a remarkable man, a humble man, one whose courage, composure, honed iconic skills came to the fore on that fateful day when winged creatures destroyed both engines of US Airways Flight 1549 from La Guardia to Charlotte Douglas airport. Based on Sully’s book “Highest Duty” the film, with stunning integrity, splays upon the screen the historical water landing (ranking with 1969’s moon landing) and the chilling investigation by the Nation onal Transportation Safety Board challenging Sully’s decision not to return to La Guardia.

Tom Hanks, with amazing aplomb, gives a scintillating depiction of a man shunning heroism, but whose ironclad confidence never varied or wavered in his role as captain; Aaron Eckhart’s deft performance as co-pilot Jeff Skiles, lends pluck and grit in support of Sully’s landing decision. Their midnight runs through Times Square and the murky docks of the Hudson, reference the enormous pressure they faced if found guilty of poor judgment, endangering the individuals on that fateful flight.

Sully when asked about courage said it was “not the absence of fear but doing what you have to do in spite of it”; the film is inspirational, Olympian in scale, he was the “master of his fate,  captain of his soul”, his “unconquerable” soul allowed the passengers on Flight 1549 to live and fulfill their own destiny.

2016-09-14
Peneflix Admin
Share !
Previous: THE LIGHT BETWEEN THE OCEANS
Next: SNOWDEN