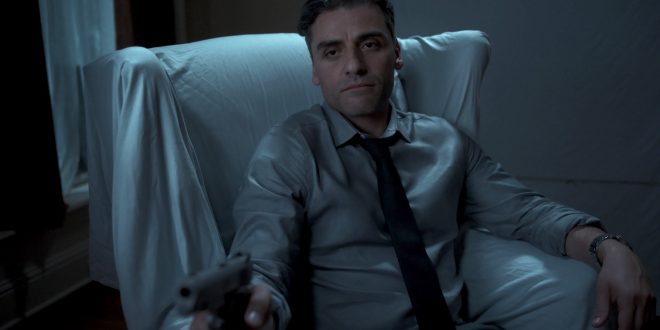 You will investigate one of the more intriguing protagonists on today’s screen; “William Tell” (depicted with astounding skill by Oscar Isaac), is a gambler with inscrutable control, a card counter, winning just enough to live, avoiding the casino’s radar screen; Tell is the purist study of PTSD I have ever witnessed; jailed for his role as an interrogator at Abu Ghraib (prison in Iraq), the venue for the worst human rights atrocities committed by the CIA and the United States Army; his “baggage” is enormous; William Tell, a pseudonym for the Swiss patriot and national hero who shot an apple off his son’s head (1307); “Cirk” (played with guileless prescience by Tye Sheridan) is Tell’s troubled, metaphorical son, on a doomed mission to eliminate a mutual enemy, “Major John Gordo” (minimal, but commanding performance by Willem Dafoe); their path to perdition accompanied by “La Linda” (fleshy, flashy, feisty Tiffany Haddish); director Paul Schrader (“Taxi Driver”, “American Gigolo”, “First Reformed”) has fashioned a trinity of misfits, outsiders, guaranteed permanent residency in one’s memory bank!