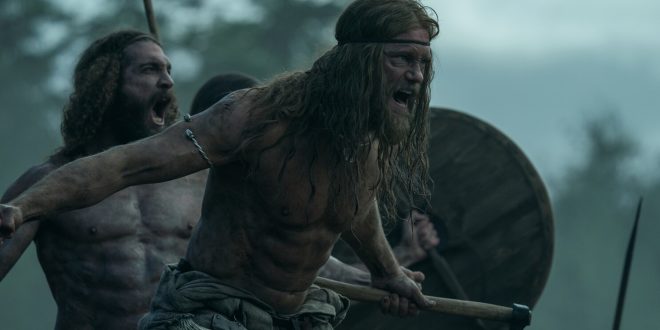 Magic percolates within the carnage of director Robert Eggers (“The Lighthouse”) “The Northman;” seething with Norse mythology, witchcraft, vengeful promises; audiences are submerged in Viking lore, reminiscent of the hierarchy in Shakespeare’s “Hamlet” and King Arthur’s legendary sword Excalibur; a murdered King, kidnapped mother/wife and a son predestined to repeat the legacy. Alexander Skarsgard with heft and bravado depicts the physically, psychologically tortured “Prince Amleth”, slaying hordes avenging his dead father, by the hand of his uncle “Fjolnir” (riveting Claes Bang); Iceland’s soaring, volcanic landscape lends majesty to eviscerating battles, destitution of the slave population and their righteousness; the epic soundtrack by composers Robin Carolan and Sebastian Gainsborough lends mystical lyricism to the scenario; cinematographer Jarin Blaschke and his real time staging is breathtaking; the narrative and action of “The Northman” blends remarkably with its special effects.

Of particular interest is the casting of Nicole Kidman (suffering from over exposure) in the role of “Queen Gudrun,” Amleth’s mother; she is superb, possessing an intensity worthy of regal rights; with prescient gusto she is the mettle behind kings, and empires. Anya Taylor-Joy as sorceress “Olga” peppers her performance with cunning guile, dazzling desirability and a countenance that knows, nor shows any parameters.

For its entirety (2h 17m) wallowing in the embryonic phases of myth making, acknowledging the artistry of Eggers and perceiving “The Northman” unveils a time and place where legends and heroes were conceived.