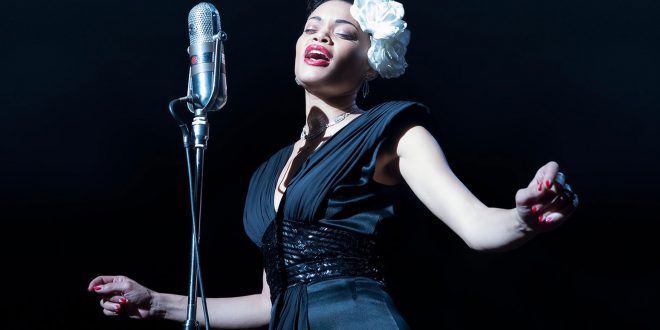 Billie Holiday (Eleanora Fagan, 1915-1959) as viewed through the lens of director Lee Daniels is flawed, but impressively watchable;  Andra Day’s soaring interpretation of “Lady Day”, nascent jazz singer whose iconic gift and influence have resonated through the ages; Day mimics to perfection Holiday’s inimitable voice, style, and egregious drug addiction; astoundingly, she captures Holiday’s fearlessness, fortitude, in an era of segregation, where society was defined by color and the government held intransigent sway over individual rights; FBI agent, Harry Anslinger (Garrett Hedlund) myopically racist, ambitiously pursues Billie because her song, “Strange Fruit” one of the most poignantly sensitive and telling ever composed, irked his warped diplomatic mores; Billie tells him that his grandchildren will be singing her song; clairvoyancy was prophetic.

Disturbingly problematic is the use of African American agent Jimmy Fletcher (Trevante Rhodes) to infiltrate the lifestyle of Billie and her crew; their illegal drug use, resulting in Billie’s incarceration, orchestrated by a conflicted Fletcher; the dynamics between the two should have been more intensely scrutinized. The lugubrious road trip begged to be shortened.

“The United States Vs. Billie Holiday” success lies in the major dichotomy between the overt racism, accepted in the 1950’s and today’s vastly improved, but still incomplete, racial divide; Holiday’s fierce independence and the inroads she paved, shocking at the time, have had lasting resiliency; her star, as dazzling in 2021 as yesteryear; fecundity flourishing with, never “strange”, just the purist “fruit”.